Race tactics? Phew, where to start? Road racing has been described as chess on wheels. Every race is different with variables such as the terrain, the wind, the rain, the condition of other riders, the action of other teams, punctures, crashes and a million and one other things all conspiring to ensure that pretty much anything can happen!

There is no way that I can cover here even the little that I have picked up over the years. There are books written on the subject (if you want one then I quite like Racing Tactics For Cyclists ) and even then, these barely scratch the surface. But let’s stick to the very basics and what you need to know for those first few races. 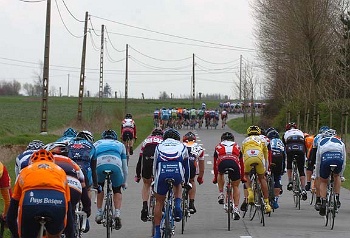 No, not what happens after a vindaloo! Wind, as in that blowy stuff that slows you to a crawl when you try and ride into the teeth of it. The air around us is actually surprisingly viscous (thick). When riding on the flat, most of your energy goes to pushing you and your bike through that air. If you sit immediately behind another cyclist and in their “slipstream”, you can be save up to 30% (5%-40% depending on which numbers you believe – but whatever, it’s a lot!) of the energy that would otherwise be required. If you can tuck in nicely behind 50 other riders it gets even easier!

The fact that it is much harder on the front (in the wind) than it is to sit in a bunch drives all road race tactics. Riders can share the work by working in a pace line , but most of the time a road race bunch is a fairly chaotic affair.

Aim of your first races
As I noted elsewhere “before you can finish first, first you must finish”. That means that for your first few events you should just focus 100% on finishing the race with the bunch. And that means “sitting in”. On no account should you be tempted, cajoled, or persuaded to stick your nose in the wind! You might feel OK right now, but the extra effort of hitting the front is likely to put you into oxygen debt and the next acceleration could see you spat out the back. So just sit in and watch what goes on around you.

Now about this “sitting in”. By “sitting in” I mean sitting in the bunch all nice and sheltered – and out of that wind. That means“in” the bunch and not riding along side it. Riding in a big bunch of riders can be pretty intimidating at first. To tell you the truth it can be pretty scary at times even for an old hand! But it is also a great buzz flying along at 25mph with ease. But it’s only “with ease” if you are properly sheltered and out of that wind.

You need to continually think about which way the wind is blowing and where you are positioned in the bunch. If the wind is blowing from the right and you are riding up the right hand side of the bunch – then you are out in the wind (and wasting valuable energy). Think about being in shelter ALL THE TIME. You need to conserve energy whenever possible – and then when the time comes, you let it rip (but that is for some later events remember. Your first events you save all your energy just to finish in the bunch).

Hanging on
Whatever happens you must hang on to the tail end of the bunch until you can’t turn another pedal rev; till your heart feels like it’s going to pound out of your chest; your lungs feel like they are about to explode and your legs feel like they are about to seize up. And then hang on some more! Don’t hold anything back thinking that you might catch up later because chances are that you won’t. It’s that wind/slipstream thing again. Once you’ve lost the wheel, generally speaking, that’s it you’re gone. If you’re going to finish with the bunch then you have to hang on for grim death at some point in these first races. If you haven’t figured it out yet, cycling has a lot to do with being able to suffer. To quote Eddy Merckx… 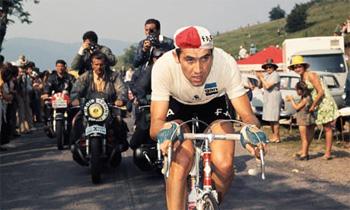 “…IS IT THE FACT THAT YOUR HEART PUMPS MORE VOLUME THAN THE AVERAGE PERSON’S, OR THAT YOUR BLOOD TURNS LESS ACIDIC WHEN EXERCISING SO THAT YOU RECOVER FASTER? NO-TALENT HAS TO DO WITH YOUR CAPACITY FOR SUFFERING. YOU JUST LEARN TO SUFFER MORE. IN THE END, MAYBE, THERE IS NO EXPLAINING.”

Just remember that if you are suffering, chances are that everyone else is finding it hard too. If you can just hang on for a few more seconds – things might ease up a bit and everyone will pause to catch their breath. So hang in there!

Moving Up
The bunch is never static. It ebbs and flows all of the time as some riders move up towards the front and others drift or get pushed backwards. Sometimes the movements are slow and sometimes it’s like a tidal wave of riders sweeping past you! The bunch is like a living thing. Depending on the makeup of the riders in it and what is happening in the race. Sometimes it can be angry and fast moving (when there are a lot of violent attacks being made) and sometimes it is calm.

However, in all that movement – unless you keep moving forward, you will drift towards the back. For your first races, this is not a big problem. Later, when you are racing for a result you will need to be able to maintain your position towards the sharp end of affairs but for now don’t worry too much about drifting back.

When you do want to move up, don’t try and do it when the bunch is moving full gas (at least not in these early races). That would be a waste of your valuable energy reserves. The best time is just as things start to ease at the front, you can use your momentum to carry you forward up the outside as the rest of the bunch slows. Even better, wait until someone comes past you who obviously wants to move up – and follow their wheel forwards!

Drifting Back
If you’re not so confident on the climbs (or you just want to save some energy) it is a good idea to place yourself towards the front of the bunch at the start of a climb. As the climb gets underway you can climb slightly slower than those around you while still maintaining your place in the peloton. But remember, it’s OK to drift to the back – but not OFF the back. As above – you must hang on! The trick then is to pick a quiet time to move back towards the front for the next climb…

Riding in a bunch of riders is a skill. You can’t get good at it by reading a book or an EGCC web page! In the end, you just have to get out there and give it a go. And with practice you will get more accomplished at it.

Going out with a club run or a chain gang will help enormously to prepare you for riding with other riders and I strongly recommend that you do that before your first race. These types of “friendly” environments will get you used to following a wheel closely; allowing room for others when cornering and getting used to the variations in pace and effort. All invaluable nuances to get used to.

When you are in a bunch, try and keep your head up and look ahead of the bunch and the riders immediately in front of you. Just use your peripheral vision to keep an eye on that wheel right in front of you. By looking further ahead you will be able to anticipate movements in the bunch. Is there a corner coming up (the bunch may brake and slow); a parked car (the bunch will move to the right); is someone attacking (the pace is about to go up); a steep climb looming (better think about your gear choice). If you ride staring at the wheel in front, you’ll be left violently trying to react at the last minute. This is not safe and will be hugely draining – you want to be safe and conserving of all your energy levels.

Keep a good pedal cadence. Many really strong time trialists and sportive riders routinely push a big gear at 70 – 80 rpm all day every day. In a road race this makes it much harder to react to rapid changes in pace. If this is you, try getting used to spinning a lower gear at say 90 – 100 rpm. You will be able to change pace more easily and it should be more efficient (i.e. spare that valuable energy!) to boot.

It is perhaps obvious, but in a longer road race you need to be able to eat and drink on the move. When out training, practice reaching down and tacking your bottle out of the cage without looking at it. Do the same putting it back. You shouldn’t need to look and you don’t need to stop pedalling. If you’re slick at this you will be able to keep hydrated even when the going is tough. You need to be able to get food out of your pocket and into your mouth one handed. So if you have energy bars or whatever, make sure you open the packet before you put it in your pocket at the start. Some of those packets can be hard enough to get into when you’re sat on the start line. But it gets a whole lot harder with sweaty fingers, sat in the middle of a bunch going down a hill at 30mph while dodging pot holes!

Again obvious, but you need to ride in a straight line. Riders wobbling and weaving about in the bunch are about as welcome as a fart in a space suit. You will get better at this as you gain bunch experience, but you can do some practice beforehand. When riding down a road with a white line down the side, try riding keeping both wheels on the white line. You’ll find that as with bunch riding it pays to look ahead a little rather than where your front wheel is right now. Developing a fluid pedalling style and riding in a straight line will also make you more efficient rider (again – save that energy!).

And talking of wobbly riders, try and take notice of the riders around you. You will start to notice that some riders are smoother and safer and seem to always be in just the right place. These are good riders to follow in the bunch. Other riders struggle around corners, leave gaps when he pace goes up and generally seem out of place. Try not to get stuck behind these riders. Following a good wheel will conserve your energy and provide a good role model to learn from. And remember – if it’s windy, that great big guy will provide more shelter than that skinny little climber type (you are thinking about shelter all the time right!).