Mikey and Luke do the Bristol GP

Three weeks ago I decided it was time to start last minute training for my favourite race of the summer; the Bristol GP. I had planned on a longer 8 week block of intense crit training for this, but a crazy few weeks of feeling good and chasing BC points early in the summer, when I raced 8 times in 2 weeks, had destroyed me, and I had only just recovered. PW kindly decided to use me as a guinea pig for his coaching qualification, and tailored a regime for me that I had actually followed (kind of – more later).

The Bristol Grand Prix is a crazy, city centre criterium festival, running a figure of 8 around Park Street in Bristol. This is the same road used in the Red Bull urban hill climb, and combined with tight corners, a small cobbled section, narrow lanes, several thousand metres of steel barriers, 50 hyped up roadies on bikes, loads of rowdy spectators with cowbells, and a guy slowly losing his voice into a microphone, it makes for some great racing and viewing alike.

This year’s reduced EGCC lineup was due to be Robin Parker (Masters), Luke de Quay (4ths), and Mikey Weavers (E12). Mikey’s ambitious nature led him to enter the elite race while still 3rd cat, so convinced was he that he would be 2nd category by then (he was right).

So early on Saturday morning, two thirds of team EGCC set off for Bristol, with my brother JP as supporter, coffee fetcher, and photograper for the day. We had hoped to catch Robin’s race, but he hadn’t signed on. Where was he? A close inspection of Strava reveals that Robin is undertaking a Rocky 4 style training regime in preparation for his assault on the club hill climb next week, to rise to the challenge set last year by Henry “Ivan Drago” Latimer. Anyway I digress..

PW had kindly set me a warmup to do the evening before, but my uncoachableness (its in the dictionary; look it up) and an extreme bout of tiredness after a weeks work meant it didn’t get done. In the carpark Mikey and myself decyphered the pre-race session and I set about getting warmed up on the rollers with Mikey shouting instructions. The whole concept of 90% efforts is a bit alien to me, in the same way I find dimmer switches pointless. My warmup was combined with drinking black coffee in very unscientific quantities, but perfectly timed with 30 minutes to go, for extra ooooommmphh in the race. 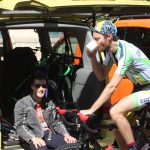 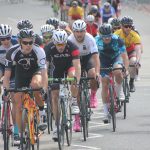 Hiding in the pack 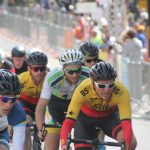 I would eventually be beaten by the chap in the BMX helmet. A very sensible headgear choice for 4th cat racing.

Now I will switch to the present tense as apparently it makes the account more exciting..

We bunch up behind a noiseless electric car at the entrance to the carpark. I’m 3 rows back. An interesting bunch of riders is gathering around me for a 4th category race. I’m looking around for safe wheels to follow and riders who look fast. The chap in the BMX helmet, T-shirt and baggy shorts, and toeclips might be toying with us.  There’s one guy from Cowley Road Condors that I recognise as a fellow survivor of last week’s crash-fest a Hillingdon. Maybe we can work together. We ride behind the pace car to the start, checking out the course as we go. I make up a few places to get to the front on the line, but get an angry “Oi mate, we arent racing yet!” as a rider bar-bashes my elbow from behind as I take his space through a large empty gap. I politely ignore him.

We stop, stand behind the line, re-clip in and follow the pace car for a neutralised lap. Up the hill, 90o left, downhill, road narrows and goes right, then left, up a steep hill to another sharp left-hander, flat 100m , then 90o left and back down, then tight right, under the bridge, road narrows and goes right over some drains and cobbles, and then hard right into a narrow alley. The noise of expensive carbon rimmed wheels squealing and locking up under braking as riders misjudge this bend, followed by yells of “Whoah #$$*” , makes me glad I started at the front. Out of the alley, cobbled right-hander, and straight up park street. The car pulls away silently, and GO GO GO, we are off! Aaargh, legs! Come on coffee, kick in! For the first lap we are flying around corners and braking late, too late, I misjudge the corner before the alley and lock both wheels, just catching it in time. I’m using my elbows and knees to great effect to make me as wide and un-passible as possible if someone decided to try easing through the couple of inches I leave to the inside barrier. I’m feeling good. 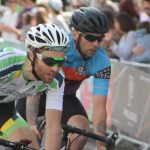 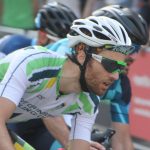 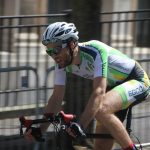 Now.. the next bit is a bit fuzzy. At some point it starts to get harder staying in the top 10, and the group is definitely shrinking lap after lap, but I don’t want to look behind in case something happens up front. I hear JP and Mikey cheering me on lap after lap, but I’m not sure exactly where from, my focus is on not blowing up. Up park street I suddenly run out of juice, and close my eyes and grit my teeth in a last ditch effort to keep contact with the leaders. Its no good, my head is spinning, and they ride off, up park street, followed by another small group, and maybe another. Somewhere the messenger in BMX helmet passes me too, he’s fooled us all and is a contender. I want to get off and sit down, but no, I’ve been looking forward to this race, and I’m going to have some fun. I look at my garmin to see how far into the race we are. Ah! I forgot to press start. No idea! 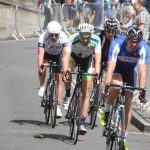 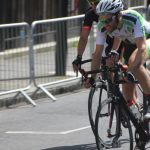 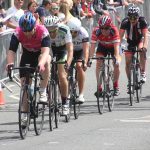 Then begins the inner ring spin. High cadence, staying in the 39 ring, and I start to recover. Lap after lap I regain energy and after joining a couple of riders in a similar state, we start to catch others as they drop off the pack.

Out of nowhere the leaders come from behind. We pull aside, but it’s the narrow section and confusion ensues with exchanges of “are you in the lapping or lapped group?” One of the lead group rides headlong into a barrier after forgetting to brake, and takes another with him. He remounts and chases, but his de-railed partner has to get off and walk.

Finally they are gone and we regroup. How much longer of this crazy fun? 10 minutes? Every time we pass the line, people are ringing bells, so I have no idea how we will know when the final lap happens.

The rider from Cowley Rd Condors appears ahead. I suggest we work together, and we do a few turns each, and it works, we are thinning out the group, and drop a couple of on-the-limit riders. Success! My legs are recovering and I’m starting to feel good again.

Those bells! How many laps? Race organiser Phil is standing there holding up some laps-to-go fingers , but how many? “One?” I shout. “No! two” shouts Phil.

OK, now its pain time! I go to the front of our lapped group and stay there. Steady… steady.. last lap, stay in front, and straight out of the last corner; ATTACK! , Still in the inner ring, I give an all out effort, spinning at 150rpm, long sprint all the way to the finish, and nobody comes around me. Why can’t I do this when I finish in the pack? 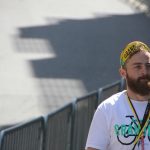 Bristol, home of the bearded hipster. These chaps make the event happen. Chapeau! 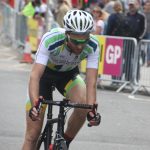 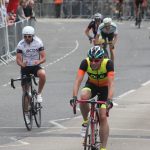 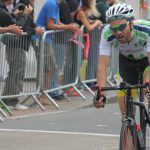 No Idea of my placing, but its not last. Coming back to the carpark, I confuse a very high left turn signal from another rider with a Usain Bolt impression to impress the ladies, and nearly crash into him as he swings left.

I do some laps of the carpark and then lie down on the pavement, gathering my breath.

Now there’s a 3 1/2 hour wait for Mikey’s race. Time to see what Bristol’s food Market has in store for lunch! 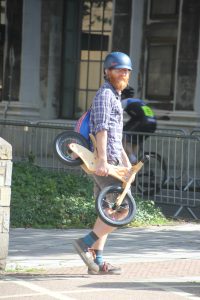 The Bristol Grand Prix is a criterium race around the centre of Bristol and probably the most confusing race to watch or participate in.

We arrived at 10:00 after a 07:00 start to the day. The agonal spurt master was to set off at 14:10 for what was to be a bonk fest (of the cycling kind). The earlier races were a sign of how all races would pan out with groups of maximum 7 riders making the ‘peloton’. The masters race took place first and signified the start of the event as a whole.

By the time it was Luke’s turn, the weather was perfect. Sunny with a breeze. As was expected, the organised section of the race lasted a whole 2 laps before it spontaneously exploded. Within 5 laps it was impossible to tell who was in the lead and where everyone else was. Luke seemed to be……. well, racing, other than that deduction, JP (the man, the days photographer and designated hipster) and myself had no idea how he was doing.

We went to the finish to see Spurticus spinning at about 300 rpm across the line to win the sprint for some place in the race, still unsure on finishing position. Luke reckons about mid teens. 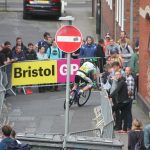 That corner into the backstreet 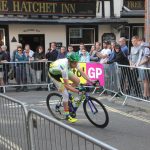 Watch out for drain covers! 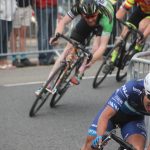 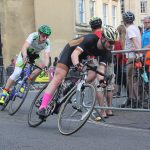 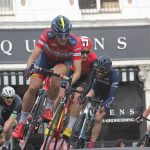 After an 8 hour wait and a brief nap, it was my turn. After last year where I had been so stressed that I was at threshold heart rate before the race had started, I decided to remain chilled. I went too far and didn’t leave enough time for a warm up, a short Luke themed warm up and discovering I STILL wasn’t comfortable on my race bike and I was into the 45 min + 5 lap race with the likes of Rory Townsend (eventual winner) and Isaac Mundy (national hill climb champ). I started at the back of the bunch after getting a bit over excited on the scouting lap, rear ending another rider and slicing my tyre on his cassette. I remained near / at the back for the entire race. I managed to overtake a couple of people but was also lapped. Considering Rory Townsend almost lapped 2nd place, I wasn’t too upset about this. Biggest cheers were for a bloke named Harry who had been lapped multiple times. He was even given the job of medal ceremony handing out man (prestigious I know). 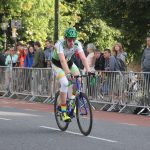 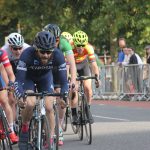 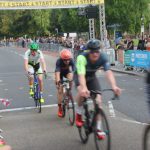 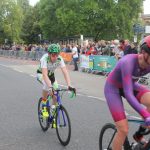 Mikey and the legend that is Harry 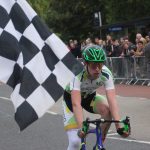 Thanks to John Paul de Quay for his photography skills!