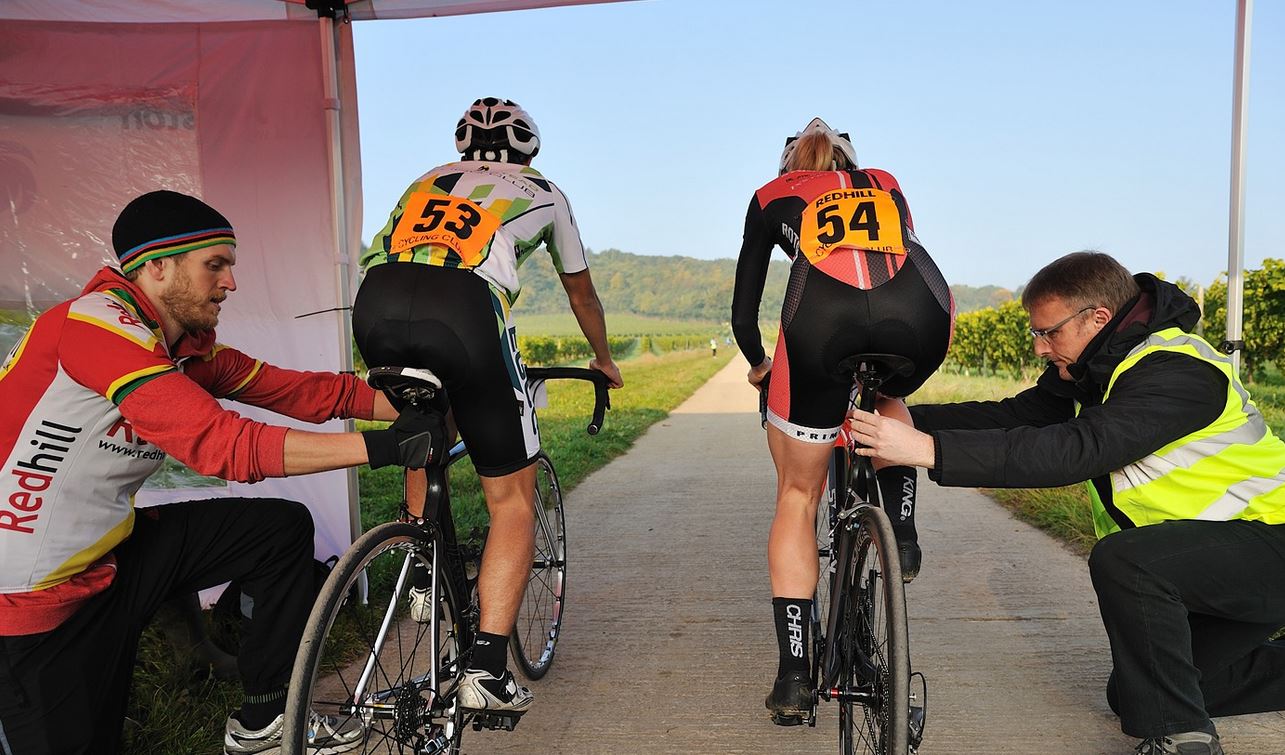 An interesting one this. Take one hill, start riders two at a time and have them duel it out to the death! Round 1 is all about times with the fastest 16 riders qualifying for the knockout stages to follow. Then it’s mano a mano with the 16 reduced to 8; then semi-finals and finally the grand finale.

The hill itself is about a mile long with an average gradient of around 6%. The lower slopes are steeper, with the gradient easing off towards the top. Having ridden the climb during my warm up I figured the finish would be small ring if you have raced the whole climb hard. But if you’ve taken it steady on the lower stretches, then it could be a big ring sprint.

My round 1 start companion seemed quite strong. As we accelerated away from the start, he was happy to take up the running as I slotted onto his wheel. With round 1 all being about time, I was pleased to have someone to work with. As we rounded the first corner I took over the lead and pushed the pace on. I was conscious that whatever happened I wanted to make sure that I beat this rider – but at the same time we both needed to keep things moving.

About half way up, my companion came through and gave me another turn. We’re rolling well. As the gradient started to ease off, I could sense that we needed to up the pace a bit. I clicked it up a gear and pressed on past my companion assuming that he’d drop in behind me. But he’s popped!  I sense that I have a gap and press a bit harder to make sure that there will be no coming back. Then it’s just a question of timing my effort to get as much out as possible up to the line.

I finish with a 4:21 which will be fast enough for 11th overall and 2nd placed vet (missing out on the £50 vet prize by 6 seconds – grrr). Young Nick Martin did a creditable 4:40-ish (sorry, I didn’t note actual time!!) and unfortunately missed out on the final 16 by just a handful of seconds.

Round 2 and I line up against Will Adams (Rapha CC) – the man that beat me for the vet’s prize. I know that there’s no way that I am going to out hill climb this guy so I have only one tactic. I will have to sit in and try and outsprint him. As we roll off the start line, Will sets a steady pace and I slot in on his rear wheel. And that is us for the almost the entire climb. The pace is brisk, but by no means flat out and I am feeling pretty comfortable.

As get nearer to the summit I select the big ring and prepare for the sprint. Will is still in the small ring. If he leaves it there, then I’ll have him for sure. If he leaves it late and then goes for the big ring, I’m jumping as soon as I hear the sound of chain mash. Unfortunately he’s much to wise for any of this and selects the big ring with plenty of time to think about the sprint. As we approach the 200m to go sign I launch my sprint and quickly move alongside Will. But Will responds and responds strongly. He’s quickly back in front. And then there’s a gap and I just can’t close it. There’s nothing left in my legs and I am beaten before we reach the 50m to go “sprint zone”. I roll across the line. Defeated and deflated.

I had hoped to get though one of the knockout rounds. But it wasn’t to be. Still, it was a fun event. A very novel format and a really well run event by Redhill CC and Dorking CC. Maybe next year!