We noted in the Introduction that we need to understand the demands of our event in order to understand where we need to focus our training effort. So what does it take to do this road racing lark then? Well you obviously need a certain base level of fitness to be able to ride at a fairly brisk pace for the duration of the event. But in a nutshell the big difference between road racing and time trialling/ triathlon/ sportives is the variability in pace.

So in summary you need…

– Ability to generate anaerobic power (to ride “in the red” or in oxygen debt) for 2 to 5 minutes (you may see this called you FRC = Functional Reserve Capacity and describes how much you can do above FTP – basically how much you can go “into the red”. Anaerobic literally means “without oxygen” (or something like that!!). This is not strictly true because you will be gasping in oxygen as fast as you can – but it won’t be enough to produce all of the fuel that your muscles need at this power output. So you will be building up a “debt” of oxygen that will have to be repaid at some point. You will have to slow up and catch your breath before you can ride hard again)

You will need a bit of all of the above. A strong roadie will have a good level across the board. But typically you will find that you are stronger in some areas than others and this then affects your tactics at races. 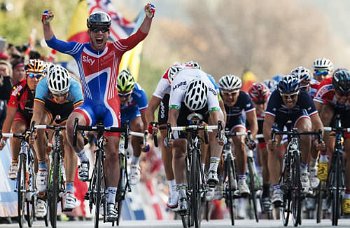 Mark Cavendish has a super sprint so his team will attempt to keep things together so that he can unleash that power (neuromuscular power) over the last 20 seconds to win the bunch sprint. Someone like Fabian Cancellara can unleash awesome power (showing excellent FRC) for a few minutes up the Muur De Gramont to destroy the opposition and then use his fantastic time trial ability (demonstrating a high FTP) to ride away from his chasers. And of course just to even get to the finish of the 300km Milan San Remo riders need an awesome aerobic base fitness.

We noted in the Introduction (when discussing the concept of specificity) that with specific training you can make improvements to specific aspects of your fitness. Most likely, if you are new to cycling or are coming from a time trialling or sportive background then you will need to work hardest on improving your FRC (anaerobic capacity) and your sprint.

Improving your FRC will allow you to respond to attacks, allowing you go with moves or even initiate your own escape from the bunch. Improving you sprint power will enable you to accelerate out of corners and ultimately compete in the sprint – and most races are decided by some kind of a sprint.

Be sure to prioritise your sprint and anaerobic sessions and focus hard on improving these areas. You will get much more out of your road racing experiences if you improve these two areas. The next section provides some example sessions that you can use to develop these aspects of your fitness.