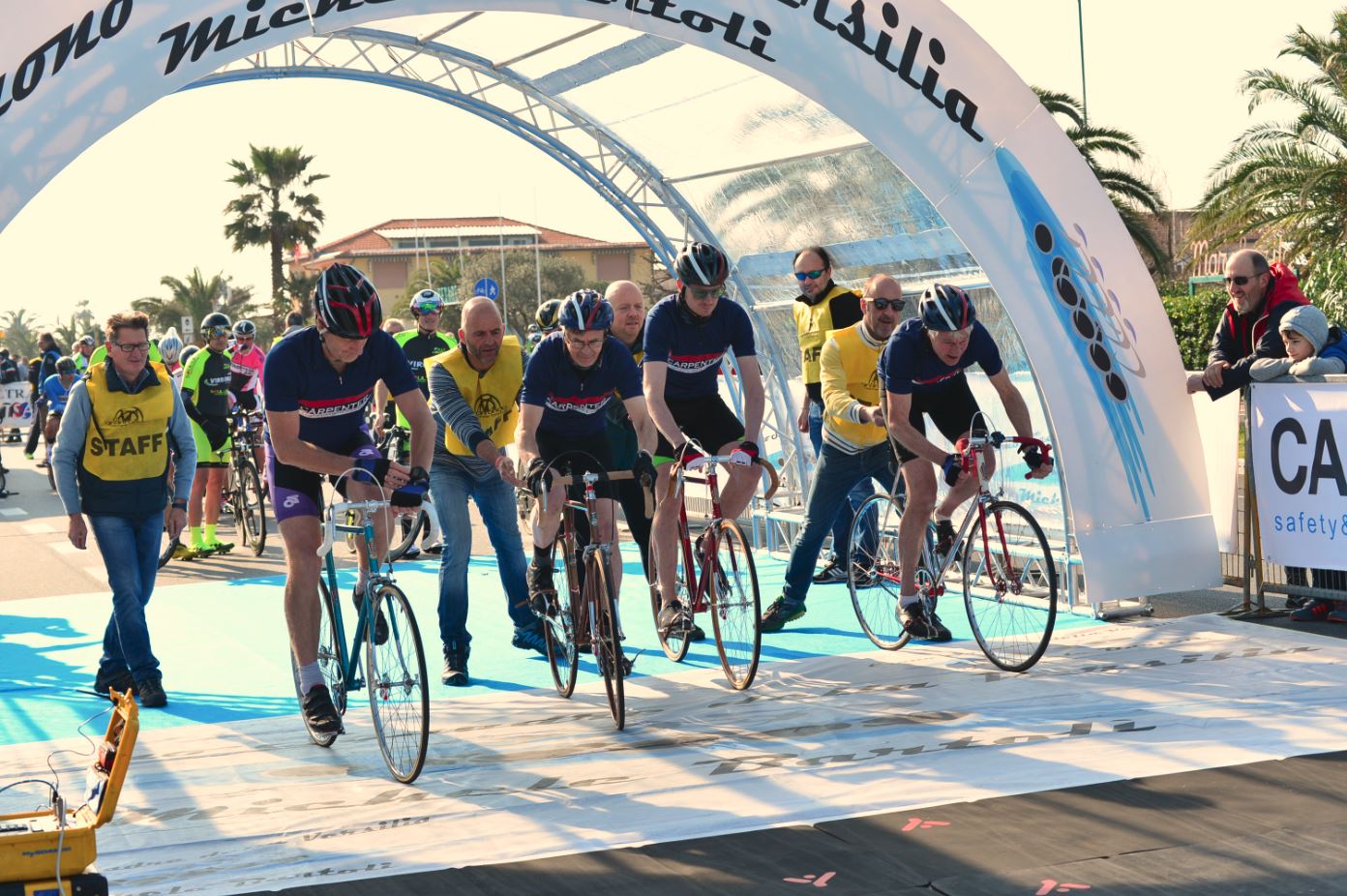 This year the Brian Phillips Tribute team entered the 4-up race and consisted of Steve Dennis, Steve Blackmore pus 2 of Steve’s Italian club mates. It was a perfect day, although a little windy, and our team competing against some excellent teams from all over Italy did very well in a very close finish coming 6th overall and 2nd in their category, which earned them a podium place. Just 29 seconds  separated the first 6 teams!

Also this year another East Grinstead member took a team to Italy – Peter Bedingfield plus his son and brother together with a friend entered as Team Leggeri Carpenter, all cycling on vintage Carpenter bikes between 50 and 80 years old. They generated a great interest from the Italians – see below for Peter’s report.

Fun in the Sun – The Italian Job.

A madcap idea, really. I enjoy a bit of action on old steel bikes. So does my kid brother John (the ‘Stayer’). So when Steve Dennis showed a video of the EGCC team in Michele Bartoli’s ‘Cronosquadre della Versilia’ TTT I thought ‘Why not?’  4 men, 4 bikes, 4 gears between us. Simple! A bit like Michael Caine’s Italian Job on bikes. Google Translate was put to work but the organisers were doubtful. “Who are you?”  “The Self-Preservation Society”. “Where are your UCI licences? Your medicals conforming to Italian Law? Your Montoye Step-Tests?”  “Give up” advised British Cycling “We’ll eat our hats if they let you in”. I emailed the organisers: “Steve Blackmore will explain where we’re coming from.” An instant reply: “You know Steve? OK, no problem, you are in”. Eeeek! Two more riders to recruit (thanks to Pete ‘Ironman’ Holley from the Tri Club, and my non-biking son Paul ‘the Whippet’). Medicals to do, bikes to build up, flights & AirBnB to book. Then the gods tried to tell us something by devastating the area with gales so it all went back a year…. “Just getting to the start line will be an achievement” said Pete H.

First, a check out. A couple of runs over the NX15/10 near Peterborough sorted out our best running order, signals, gearing and some equipment niggles. We used Carpenter fixies, dated 1936 through to ‘57. But it’s not about the bike, is it? Confession time. ‘Plodder ’ Pete (me) confessed to 3x weekly turbo sessions simulating my best (woeful) TTT effort over 50 minutes. ‘Ironman’ Pete confessed to a couple of audaxes on his trike (yes, really).  ‘Stayer’ John was adding 30 hard minutes to his regular commute. ‘Whippet’ Paul confessed to having not sat on a bike since October but promised to get out for a ride. I got dropped twice in this session so we added a new call… “OI!”. Everything pointed to a 50-55 minute jaunt for the 30.3k if we kept it smoooth and kept it tight. We might just escape last place….

I love it when a plan comes together. The team turned up from Munich, St. Neots and Nottingham. Steve Blackmore did wonders at registration, Michele Bartoli’s lovely wife filled in copious forms and issued us with Italian day-licences. Eat your hats, British Cycling! Ironman was feeling distinctly unwell, the rest of us reckoned this was just the leveller we needed to keep the train intact. “We only want you to blow the bloody doors off, Pete.”

“In bocco al lupo” (‘In the jaws of the wolf’ = ‘Good luck’) grinned the guy in a skinsuit and pointy hat on his carbon stealth-machine in the team behind us. “Crepi” is the reply (‘Die’). “See you in 5 mins”. Richard Blackmore wished us well.  Final instructions. “Just remember this – in this country they drive on the wrong side of the road”. The announcer introduced us, something about “museo storico” (legs I think, not the bikes) then thoughtfully counted us down in English. Red mist and we were off. Flat flat course, no wind, fast surface, warm enough. Fixie heaven! I tried to establish a sustainable tempo then Whippet Paul came through like a train. “Oi!”. So we settled down , strict 30 sec. turns at the front for me, a bit longer for the others, especially Ironman and Whippet. Around 35 km/h may sound laughable but it’s quicker than my evening 10 mile TT’s and no-one wanted to blow up. Our motorbike escort was being very patient, pointing out bumps in the road. After 7 mins we were caught for the first time.  ZAPP!  Back past the start. “Put on a good show lads”.  ZAPP again. Next the eventual winners with a bleeping support car in hot pursuit- brrrrm ZAPP beep beep beep!  Stayer, out of respect for his old wooden rims, picked a smooth path up the wrong side of the carriageway. Beep beep! Round the second turn with a squeal of brakes, then the feeling we were probably slowing. ZAPP!  ZAPP! Still some in the tank so Ironman then Whippet stoked it up again over the run in. In fact the last two km. were easily our quickest. 52:38. Not last! Woohoo, we beat the ‘Pink Girls’! It all seems to have gone by in a flash –as did the other teams. We waited to see Brian Philips Tribute Team in. How the hell do you get round in 39:03? That’s seriously quick, 12 km/h quicker than us, quick enough for a podium place. Now we just need to find a way to knock just 5 mins off so we can challenge at least one of those men’s teams on their aero bikes…….

Hang on lads… I’ve got a great idea.