They say that life is about the journey and not a destination. This year has been a bit of a different journey to my first race of the season. The last two or three winters I’ve had a training plan that lays down a base and then builds towards the TLI National Crit Champs in May. And I’ve stuck to the plan and hit the early season races full gas. This winter was different. For a variety of reasons, some of which are just in my head and inexplicable even to me, cycling just wasn’t a priority this winter. As a result I didn’t follow any plan and my training volume was way down. If I didn’t feel like going out, then I just didn’t – and I didn’t feel bad about it. There’s a little part of me that feels bad and thinks that I should consider that I’ve had a “bad winter”. But I don’t feel guilty and it hasn’t been a bad winter. It’s just been a winter that I haven’t cycled much!

It wasn’t until well into February that I started to get some regularity back into my training. But even then I wasn’t sure that I would be racing at all this season. I was just riding and doing what I fancied. As it happens what I like doing is sprint training. So although the volume was well done, there was still some intensity in there. And as I started to pick up my training I was hoping that maybe this would have helped me retain some fitness from last year.

Into March and I was starting to feel a little stronger. Enough to apply for my LVRC licence. Just in case I fancied a ride or two – but no commitment you understand.

The first LVRC race of the season at Gravesend Cyclopark was snowed off on its original date and was reorganised for Saturday 7th April. I love LVRC races at Cyclopark, so late in the day I entered the revised event.

Chris Hewitt of Sussex Revolution VC died, after suffering from a suspected cardiac arrest. Dick Naylor and his organising team did a fantastic job red flagging the event immediately and the first aid crew were down there within minutes. The ambulances and helicopters followed really quickly. But unfortunately Chris didn’t make it. Word spread before we left that someone had died. To say that everyone was stunned was an understatement. Obviously memories of Brian Philips and other that have been taken too young are all dredged up.

I didn’t ride at all on Sunday. Somehow I just didn’t want to.

But by Monday I was back out. I can sit on the sofa and get fat and risk god know what ailments from that. Or I can stay fit and health and enjoy life. And all things considered – I love to race.

Credit to Jen (that’s my long suffering wife!). She always worries about me racing as it is. But despite this, she encouraged me to get out there and get back to racing. And so Wednesday evening I head out to Hillingdon for the first of this year’s Wednesday evening Masters races.

Masters road racing is a pretty close knit community. So talk before the race was all about the tragic events of Saturday. Before the start, race organiser Des said a few words and we had a minutes silence for Chris and Michael Goolaerts the young rider who tragically died after also suffering what appears to be a heart attack at Sunday’s Paris Roubaix.

The race itself was usual Hillingdon Masters faire. Fairly lively pace, at a tad over 25mph average, combined with a fairly stiff breeze blowing down the drag at the back conspiring to keep the bunch together for a sprint. So how were my sprint legs going to be? My power numbers are a bit down across the board on the last few years. But maybe a few percent off my top end might still be enough.

Once the 3 laps to go board came out I maintained a good position in the top 6 to keep out of trouble. As we took the bell I was starting to get a bit swamped as riders moved up on the outside looking to get into position. Patience, patience. I held the inside line and waited until we rounded the bottom corner and headed up the back straight. Sure enough a slight gap opened on the inside as we headed up the hill. I didn’t hesitate – I was straight through.

As luck would have it, on the outside, Darren Austin knowing that he doesn’t have much of a sprint, went for a long one. I was able to drop right onto his wheel. Perhaps a little far forward and if Darren died then I was going to need to watch for the counter attack. But with a tailwind last 200 metres, I knew that I could go long.

Round the bends at the top, Darren is doing a good job of keeping the pace high enough to dissuade any attacks. Round the top and it feels like he is slowing. I leave it as long as I possibly can, but I know that it’s crucial that I don’t get jumped. At 250 I launch and I’m leading it out. Round the final bend and pointing straight at the finish. Sit down click up a gear – accelerate. Sit down click up another – accelerate. Jeez this tailwind is strong. I can sense a rider at my right hip. Sit down click up a final time – accelerate some more. The rider is still there. But I can’t see them and they’re not gaining. Keep your form. Keep your line. And keep sprinting right through the line. Yes, it’s a win!

That feels good. Yes I love racing. I remember why I fell in love with this daft sport now!

So after a bit of a random winter, I end up winning my “first” race. What’s going on there then? Well you need the power for sprinting. But you also need to be in the right place and unleash at the right time. It wasn’t a flat out run into the sprint. Without any proper lead-outs like the pros have and especially into a head wind, everyone wants to be near the front but not on the front. Inevitably this causes a lot of “congestion”. So the tales of “I was blocked in”, “someone switched me”, “I couldn’t get through” and the like are many after these kind of finishes. The trick is to be in front of the mess and dictating. And if you’re a few watts down – well, no one gets close enough to notice.

This win I dedicate to Chris Hewitt. RIP. Ride in Paradise! 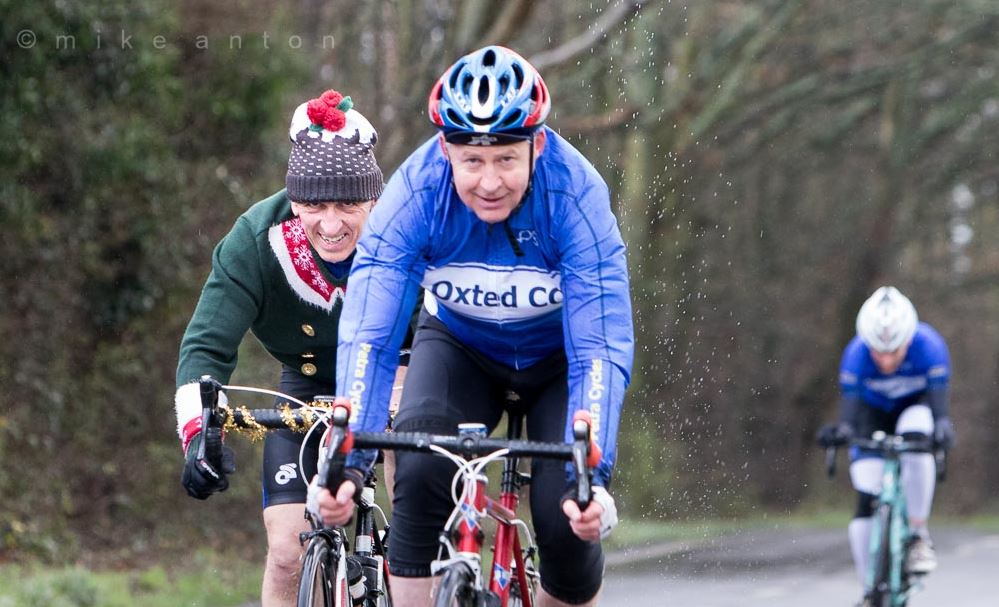 I would like to invite you to our club christmas party at Horne Golf Club Sunday 16th December . 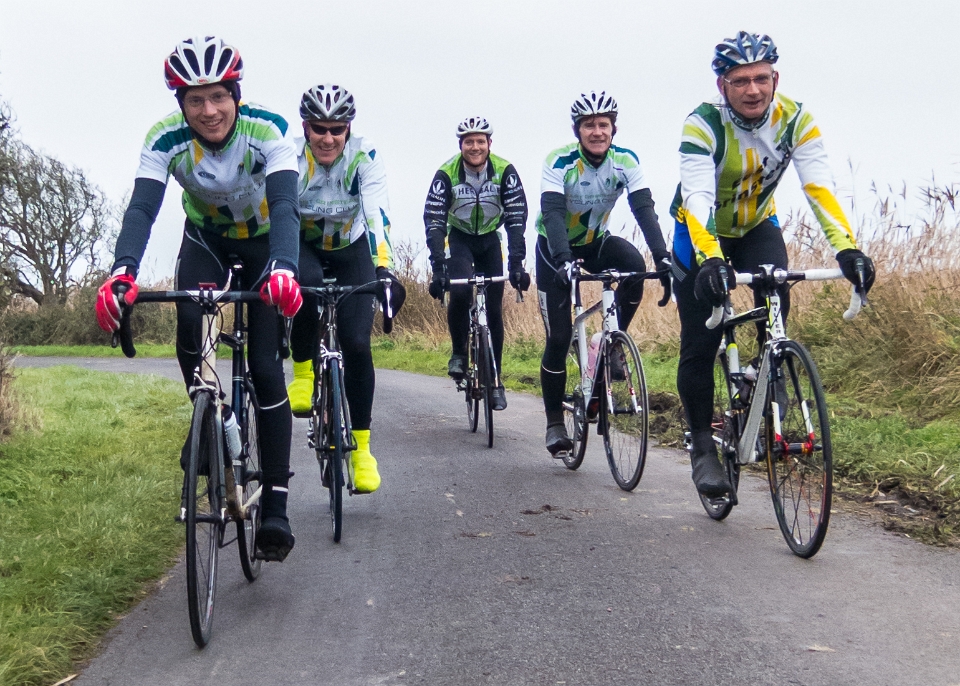 Luke will be leading an easy ride, aimed at relative beginners and those new to group riding, this Saturday 1st Dec.

Meet at 9.30am, outside the Cinema on King Street for approx. 30 miles riding …

Eight members of the club took part in this years ESCA Reliability Trial on a cold but sunny morning from this years rider HQ at East Hoathly. Six members of the Saturday gang joined Paul Harris and Richard Woodward for … 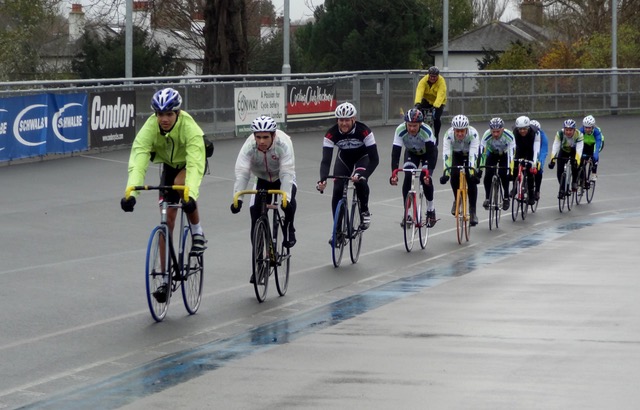 Mark Bailey flew the flag for Redhill, Susan Fagan joined the EGCC contingent. I thought she might be a rookie, but nooooo – she’s even got her own bike stored there. Richard W and Russ C brought …