What is a Time Trial?

Time trialling is a very simple format. Its a race against the clock, with riders starting a minute apart. It’s known as the ‘race of truth’ because there’s nowhere to hide, no one to draft behind (not allowed), just you and the bike and the thumping of your heart. Oh, and a clock ticking.

Most events are fixed distance, being 10/25/50/100 miles. There are also fixed time events 12/24 hours, the objective being to ride the furthest you can.

Courses are on public roads and are either ‘out and back’, using a roundabout to turn halfway, or circuits with consecutive left turns. You can take part on any roadworthy bike except a recumbent. Normally you need to be a member of a Cycling Time Trials-affiliated cycling club. 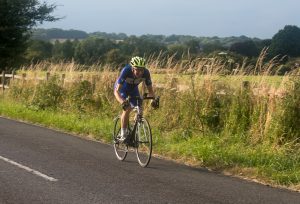 “Thirty seconds,” the timekeeper calls out. The starter holds you up while you clip into your pedals. Deep breaths. “Ten seconds.” Your pulse is rising, your mouth goes dry. “Five, four, three, two, one…” You’re off! Out of the saddle, you’re powering down the road to get on top of your gear.

For the next half an hour your lungs will work like bellows. Your legs will strain on the pedals. Your nose will run. You’ll be effortlessly overtaken by a skinsuited cycling machine who set off four minutes back, his disc wheel roaring like a Star Wars TIE fighter.

At the finish you’ll suck in ragged gasps of air, feeling so shattered you want to be sick. So you’d be forgiven for asking: where’s the fun?

Well, it’s nice when you stop. But there is more to it than that. Once you’ve got your breath back, your body is swimming with endorphins. It feels good And at some primal, work-ethic level, it’s satisfying to have ridden at 100 per cent capacity, to have learned where your limits are. There’s a sense that you’ve used the time productively, having seized the day rather than let it drift by.

It doesn’t matter what your fitness level is, whether you’re 22 or 82, male or female. If you can ride 10 miles on a public road then you can ride a time trial. It’s not like a road race, where if you fall off the pack your race is over. Since the slower riders set off first, finish times cluster together.

You’ll automatically get your personal best time (PB) in your first time trial. Whether it’s 31:07 or 25:12, that’s your target to aim at next time. It doesn’t matter what time anyone else got – first and foremost in a time trial, you’re racing against yourself.