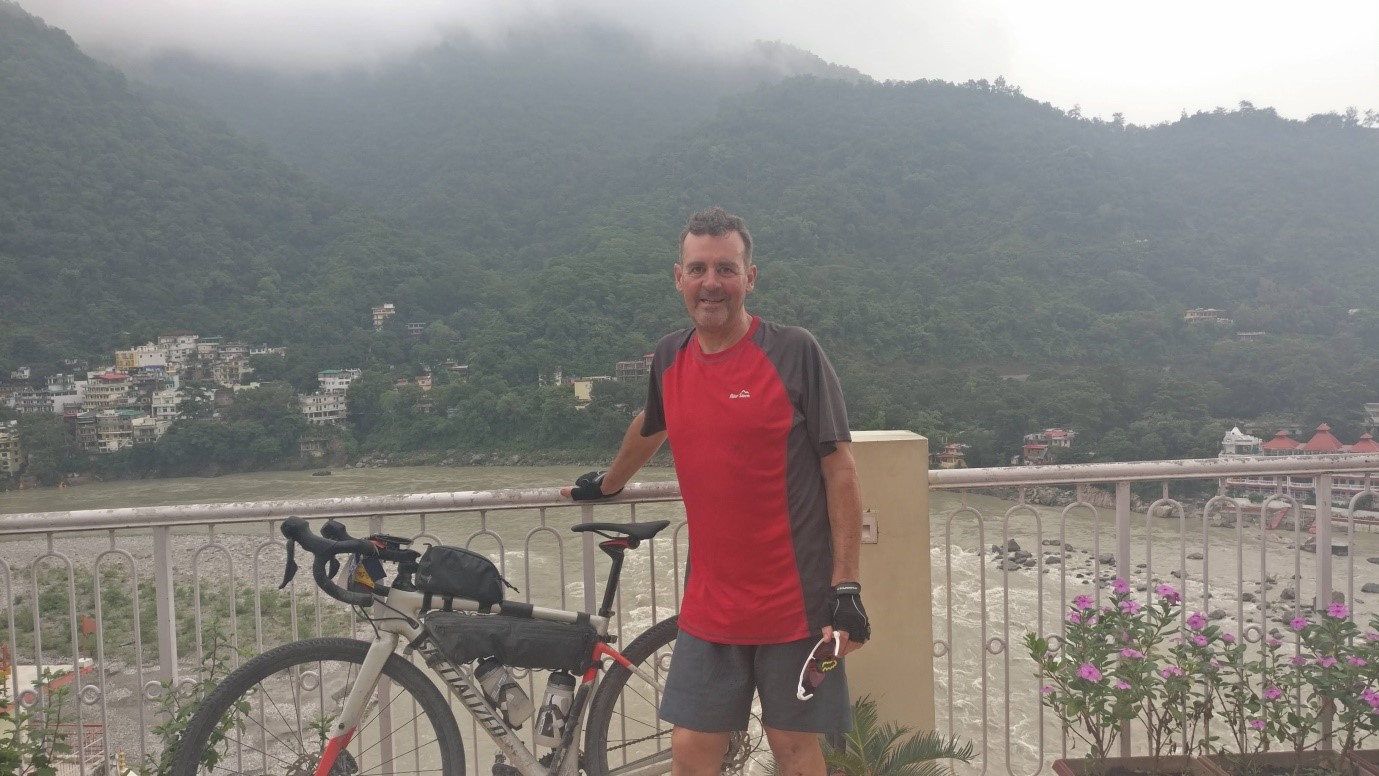 Who am I ?
I’m Simon Thompson, an ordinary guy who decided to accept a challenge. I’ve always had a bike, but I never really classified myself as a serious cyclist. I don’t wear lycra, and I’ve never ridden in a velodrome. I joined EGCC in December 2019, but I don’t have any specific training objectives – I only ride for fun. 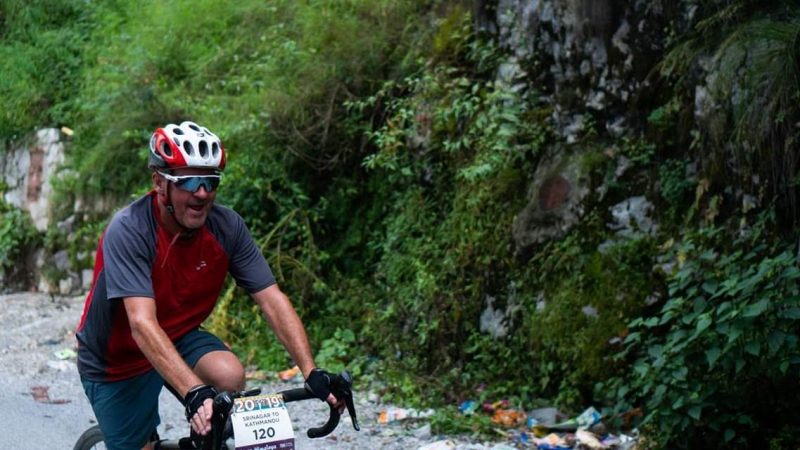 Why do the Trans-Himalaya ?
It’s the ride of a lifetime. An adventure, and a very cool but challenging ride – so why not find the time and money while you have the fitness!
Over dinner I suggested to my wife that now was the right time for me to quit my job and take a 2 month trip to India and Nepal. Of course, she agreed! 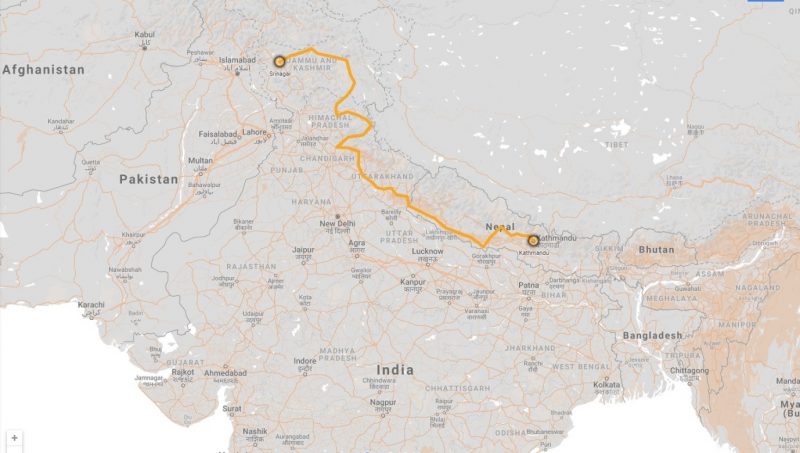 What were the challenges ?
The biggest problem by far was the altitude. It’s one thing to climb 1000m from sea level, but a whole different thing to do that starting at 4000m.
Cold was a problem on the high passes, with snow on the ground, strong wind, rain, and 2°C. And you’re out there all day.
Extreme heat was also an issue down on the plains. We had some days at 42°C. To be honest I much preferred the heat. Just drink plenty of water and take it easy. The road surface brought its own challenges. We had everything from tarmac to deep powdery dust, sand, mud, gravel, stones, and lots of streams and river crossings. 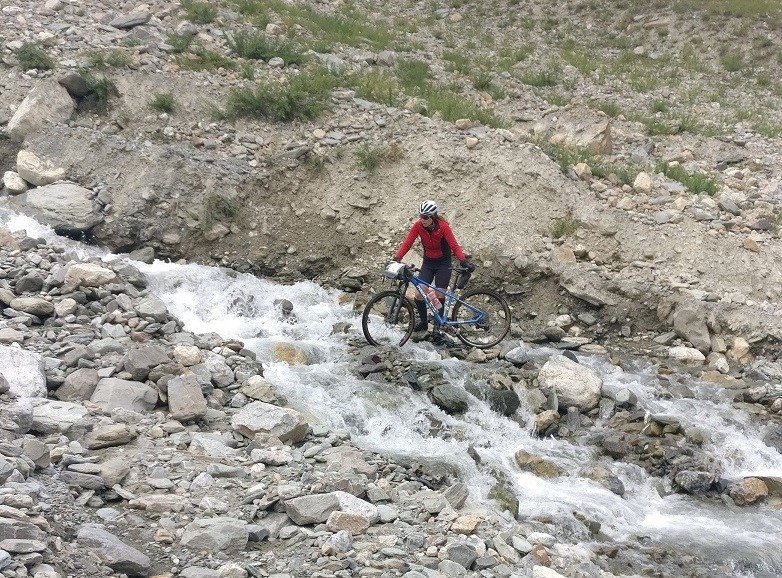 One of many crossings – your feet are definitely getting wet! 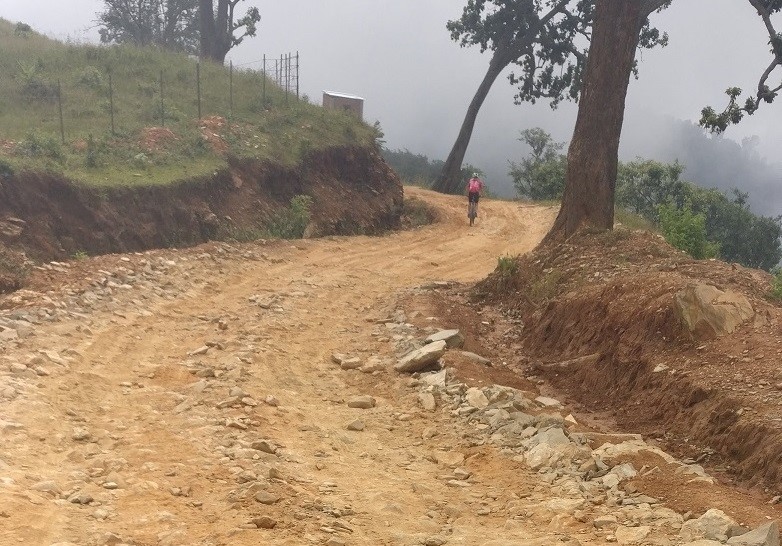 Typical Back Roads in Nepal

What bike did you take ?
I took a gravel bike, bought specifically for the event.
Specialised Diverge Comp Carbon
Shimano 105 Groupset
Disc brakes
700 x 38 mm tyres
No subject will create more debate between the riders. With a mix of tarmac and dirt, you don’t want to drag extra weight and resistance over the tarmac – but at the same time you need a bike that will ride over rocks and stones and rubble all day when needed.
Some riders took touring bikes, and some hardtail mountain bikes. I would take the gravel bike again. In fact I ride it all the time now. I even sold my road bike. I used to have a Specialised Tarmac, but I can’t think of any scenario where I would choose the Tarmac over the Diverge. 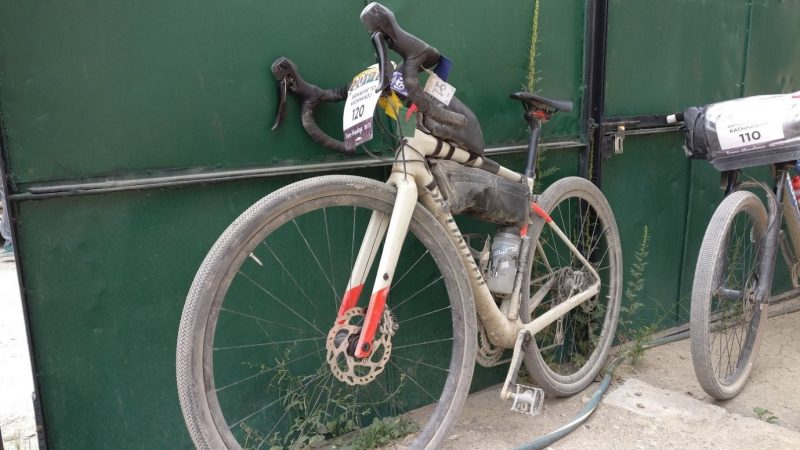 Logistics
You bring your bike and one bag. Every day they drive your bag to the next stop, and make sure that you are fed and rested for the next day. There’s a rider briefing in the morning to explain today’s route, lunch stop, and any other items of interest. Then it’s up to you to ride the stage. There’s no flexibility on schedule – you have to ride the appointed distance on the appointed day – so you’re riding whatever the weather.
If you’re ill or just can’t make it, you and your bike can ride in the van. But that’s nobody’s objective.

What training did you do ?
As much as I could. The 41 stages are split by rest days. There’s even a couple of double rest days, but the normal pace of the ride is 6 days riding followed by one rest day. With a typical riding day being about 100 km, you need to be able to ride 6 x 100 km back to back. I couldn’t afford the time to train as much as that, so I used to train 100 km every Saturday, and another 100 every Sunday. And a couple of days in the gym or shorter rides in the week.
Fortunately it was enough. But you have to reset your expectations on the trip – high altitude dirt roads are hard work, and you just can’t expect the same power from tired legs.

Health
No saddle soreness I’m happy to say.
But most people had stomach upsets somewhere along the journey. Mine was in week 5, when we left India and entered Nepal. It was the longest riding day, and it was raining. The roads in town are filthy, and on wet days wheel spray will contain everything, including cow manure. There’s also a dead dog or two along the way. By the end of the day I was feeling pretty rough and that evening was when it started for me.
But afterwards it was a rest day so I had time to recover. I was back on my bike the day after, but it was premature and I didn’t make it and had to ride in the van.
Altitude sickness is a concern as it can strike anyone, no matter how fit. We had a doctor with us who specialised in altitude medicine, and the vans carried oxygen. The only cure is descent though, and we had a few cases where riders were evacuated either backwards or forwards to lower altitudes where they could recover.

Riders
There were 22 full tour riders, and a few ‘sectionals’ that just cover a part of the ride.
Everyone has their own pace, and it’s hard to ride at someone else’s. Remember – this is a ride, and despite the fact we have numbers, it’s absolutely not a race. You’re going to stop for photos, coffees, even sightseeing along the way.
Most people tend to ride alone, with loose associations sometimes forming and dissolving over the day. However, on the first day I met Jonna, a Danish rider whose pace had completely converged with mine. On the second day we suggested to ride together, and on the third and fourth the same. In the end we rode almost the entire ride together. She dragged me up many hills and set a pace I wouldn’t always have chosen alone.
It was an interesting relationship – in the first few days it was all high altitude and we had absolutely no spare breath for talking. So we hardly spoke, and by the time we had reached the lower altitudes we had no need for speaking as we could totally anticipate each other. 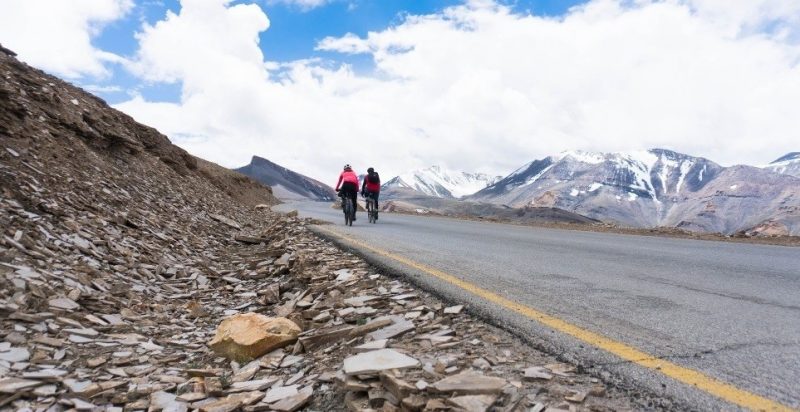 Riding buddy Jonna and myself on the Leh Manali Highway

Support
This was a fully supported tour including:
Doctor – altitude specialist
Bike mechanic
Tour staff – helping with logistics, bags, bikes, lunch – everything
Three vans (and their drivers).
Lead van – marking the route and taking bags ahead
Lunch van – drives ahead and sets up lunch. Much of the ride is in remote areas and there may not be any settlements between overnight camps.
Third van – checks in with the riders along the way and picks up anyone with health or mechanical problems if needed. 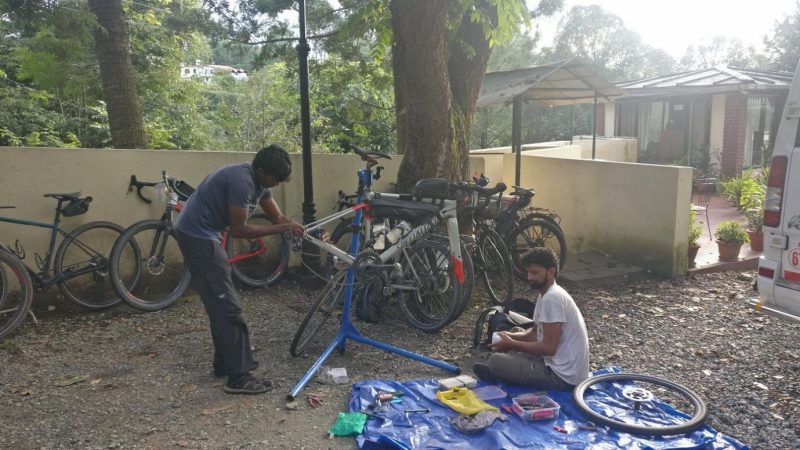 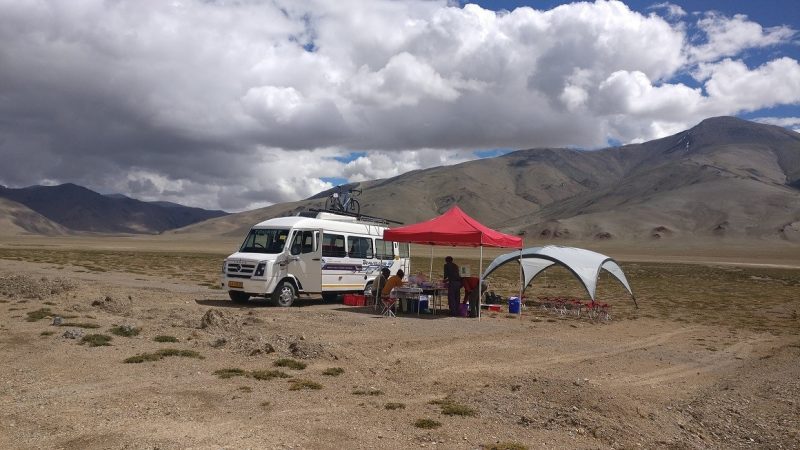 Lunch Stop on the remote plains

Navigation
Some days we were on the same road for the whole day. So navigating is not much of a challenge other than the demoralising road signs indicating 600 miles to a city further on our route. Other days we had lots of turns which makes life more difficult. The route is published on GPS, but even then there are lots of last minute changes that don’t make the cut, so you need a backup – which is The Board.
The Board is written up with turns by mileage. And on the road they use flagging tape to confirm that you’re heading in the direction, although it can go missing or be hard to spot. One rider lost confidence and turned back descending 500m elevation back to the base of the climb, only to find he was right after all. I took the Wahoo ELEMNT, which performed faultlessly.
Having said that, GPS height is a real challenge on very steep terrain – a small error to the side could put you many metres above or below your actual elevation, so your post ride numbers could be very different from the plan, and from other riders! 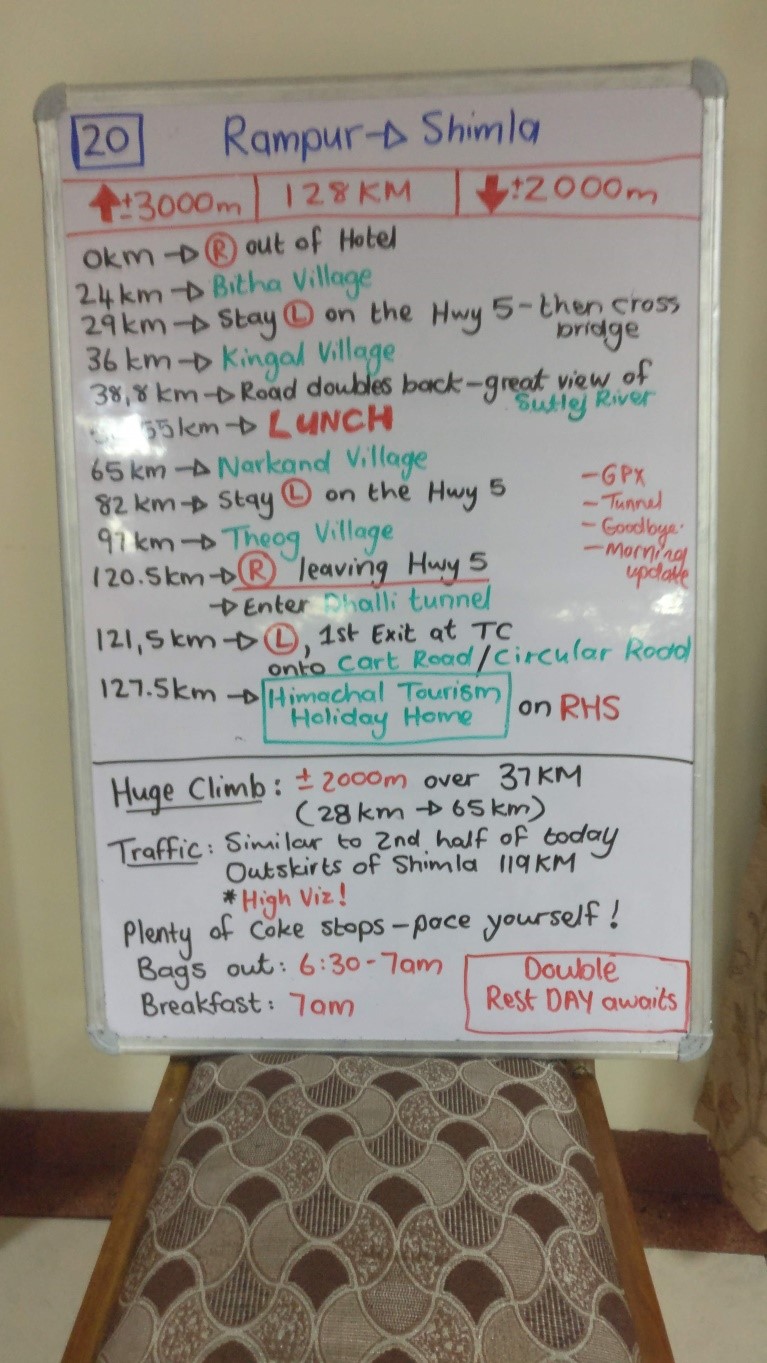 The Hills
This is no ride for the faint of heart.
Apart from the altitude, the distance and the terrain, the hills were relentless. There is no such thing as a typical day, but there were many days with multiple categorised climbs and maybe 2000 or 3000m of ascent. Many climbs are only cat 3 or 4, but there are quite a few cat HC – i.e. not categorised because they are off the scale. The gradients were typically 5 or 6%, but we’ve seen many shorter segments at 20% and more.
There are many miles with no Strava segments at all, so if you’re looking for KOMs you could probably get quite a few! 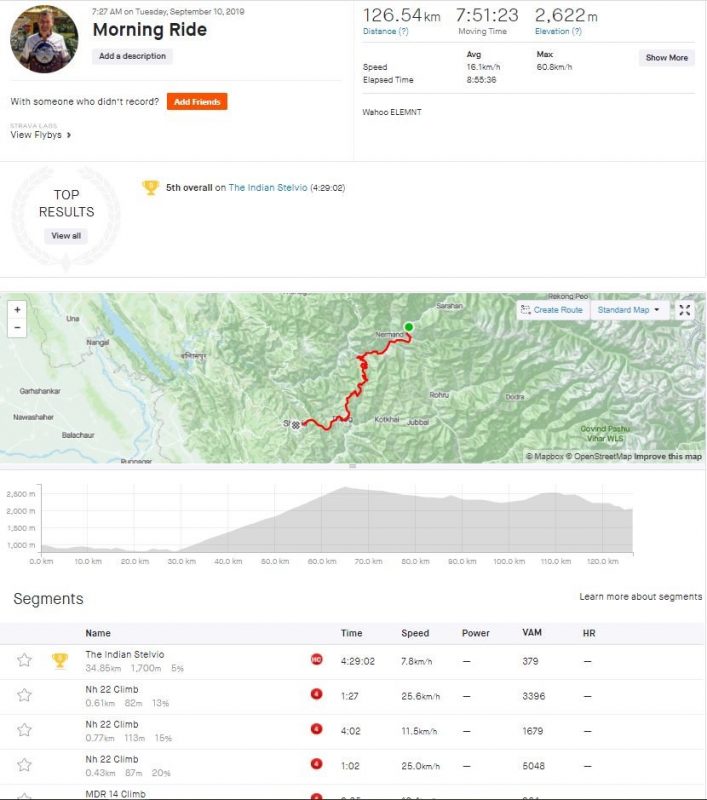 On the flip, there is the most incredible downhill. One day we were (more or less) downhill for 90 km in one go, but then a 1200m climb up to the hotel. 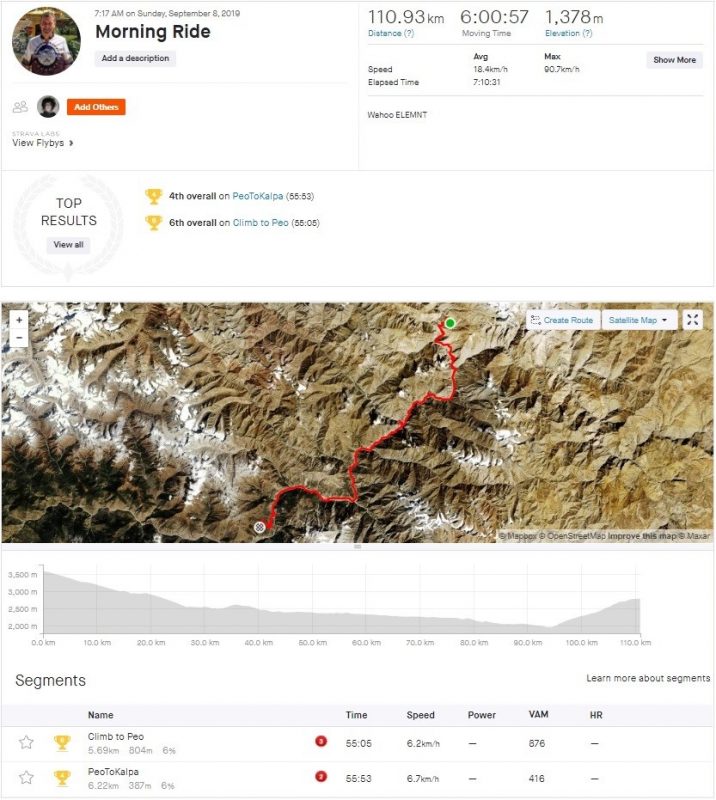 This will really improve downhill skills (see above – we were descending at 90km/h in places) and also confidence, provided you don’t look over the edge. All the hills have massive numbers of switchbacks where you can hone your cornering skills, but don’t overdo it as the drop-off is hundreds of metres. If you do look over the edge you might see the wreckage of buses and trucks below. 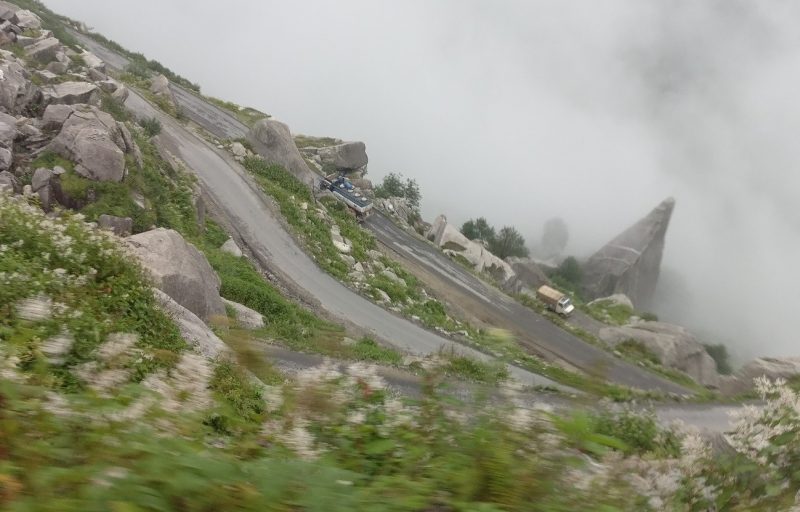 Trucks on the road below

The other problem is landslides. They are a daily feature, and to find rocks strewn all over the road is commonplace. These are some of the most dangerous roads in the world.

Accommodation
We were booked in some of the best available. But as this ride passes through remote and undeveloped areas this means everything on the spectrum.
The rest days were usually in western style hotels, but on the road it might be very basic, including one place where we were 8 in one room. In the high altitudes we were in camps which were freezing at night. There might not be a shower – but you will usually get a bucket of hot water. 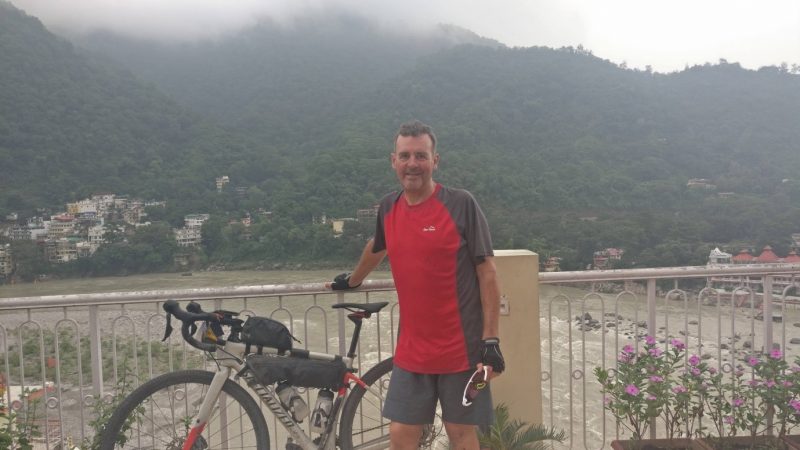 Rainy arrival at the Hotel in Rishikesh, River Ganges below

Safety
Riding on the dangerous roads of India becomes normal after a while. You get used to the rock strewn roads and potholes, and also riding close to the edge when passing vehicles. Even when you get into town and it’s complete chaos, as long as you make bold moves with clear intentions you’re not in danger. They’re on the ball and they won’t run you over.

In Nepal it’s not as straightforward. The main Highway is extremely dangerous, with drivers following 2 principles (1) Biggest has right of way (2) Overtaking blind is OK if you beep the horn.
Buses are always dangerous wherever they are: be prepared to dive off the road!