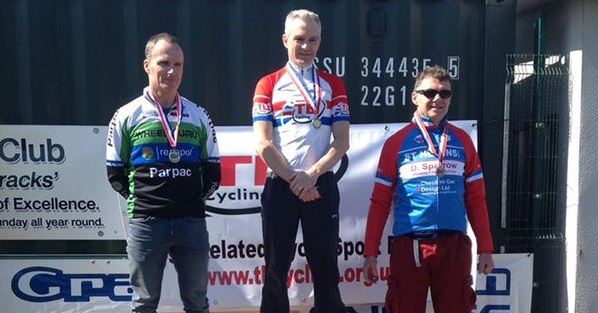 TLI National Crit Champs. My first target race of the season and the one for which all of this season’s training has been aligned to. Training this year has gone well. I’ve tweaked things a little this year (plug for Hunter Allen’s Epic Winter and Epic Spring programmes – but don’t tell anyone else, the competition is hard enough to beat as it is!) adding a bit more threshold work to improve on an area of weakness. The results have been pleasing. Whereas last year I headed into this Championship weekend in good shape but thus far winless; this season I have taken wins in February, March and April. Winning is a good habit to develop. As well as being a good indicator that things are going well, it brings with it a bit of confidence and helps you to maintain a level head when you reach that “OMG, I could actually win this” moment!

Come race day, I arrived at the Marsh Tracks circuit in Rhyl nice and early to reacquaint myself with the surroundings and to take a look at the earlier races for clues as to how things might pan-out in my race. In the senior race, despite a few one and two man break-aways, everything came back together for a bunch sprint. This is something that I’ve never seen in all the years that I have been coming to Rhyl for the TLI champs. However, normal service was resumed in the A&B cat race with a 4 man break forging ahead of a fracturing peloton.

And so to “my” event. The first half hour was something of a phoney war. There were plenty of attacks and counter attacks, but nothing too savage and nothing that ever looked like it was going to stick. I initiated a few moves, I went with a few moves and I let others respond to yet more. But no one was allowed anything more a few seconds before being quickly reeled in. This was shaping up to be a very tactical race.

Around the half hour mark, things seemed to take on an additional sense of urgency. There was a flurry of dangerous looking moves that caused the bunch to fracture and prompted frantic scrambling for wheels as everyone fought back into contention. This aggressive attacking continued for about 20 mins. There were a few times where I had to dig pretty deep to jump across to potential breaks, forcing me into the red and making me feel worryingly vulnerable to a counter. Fortunately however, everyone was in the same boat and that killer blow was never landed.

Finally, things eased off a little as thoughts turned toward the finish. I could feel that my legs were starting to tire after the frantic activity, but I figured that everyone else’s would be at least as bad. This had been a hard race as well as a nervously tactical one! Barring any last minute escapes, it was now looking likely to come down to a sprint and I was starting to feel increasingly confident that I could pull off a title defence. I had a cunning plan hatched during my warm up preparations…

The Marsh Tracks circuit is quite a technical little circuit with the run into the finish being particularly interesting. This year there was a stiff cross-headwind blowing from the left across the bottom section of the course. Then you hit a fast 180 degree turn (no brakes required) which brings you onto a short 100 metre cross-tailwind section down to the final corner. The final corner is a right-hander, not quite 180 degrees but significantly more than 90. Again, no brakes required because this corner opens out really wide into the short, 150 metres-ish, finishing straight – this year into a block headwind. Being so wide, there are a multitude of ways of getting the line wrong through that last corner especially as you cut across that wind from tail to head wind. Get it wrong (as I have on previous occasions) and you feel like a sail being filled with wind as you “go-about” into a tack, and you have to wait for what seems like an age before you can get back on the power. Get it right and you can take metres…

Now 150 metres into a headwind is pretty tough, and I figured most people would be wanting to sprint off a wheel into that. Indeed the winner from the senior race came from 3rd wheel round the corner. But that tailwind into the final corner intrigued me. I reckoned that if I could start my acceleration, wind assisted and before that final bend, that I could catch people unware and that I could take it on from the front. My sprinting has been good this year and I was confident that I could hold my speed all the way to the line, despite that headwind.

The 5 laps to go board was the trigger to unleash a final round of attacking, as riders wanting to avoid a bunch sprint sought to force themselves free of the peloton. I stayed very close to the front and made sure that I covered every move. I mustn’t let anything go now. Equally, I wasn’t about to make any counter attacks myself. I was betting everything on my sprint.

The laps passed quickly as attack followed attack and it was with equal pleasure (everything is staying together for the sprint) and dread (everything is staying together for the sprint – don’t mess it up now!!!) that I welcomed the sound of the bell signalling the last lap. Down the back straight towards the bottom of the circuit there is a brief lull. Two riders from the same team and who have been strong and very active all race, are at the front. As the bunch starts to fan out across the road, one of the pair accelerates. The other leaves a gap and shouts to his team mate to “go”. I don’t hesitate for a second and jump immediately to take his wheel.

Along that bottom cross-headwind section I am tucked in perfectly as the lead rider drills it full gas. I can sense that there are riders on my wheel, so I know that the rest of the bunch has responded too and that this is coming down to a sprint. Most likely this guy is leading it out for his team mate who is likely on my wheel, or I assume close behind. But I am well positioned, and no one is going to be moving up in this wind and at this pace. So things will be nicely lined out behind. This is looking perfect. Keep it going mate, don’t die on me now!

Round the 180 left and into that short tailwind section. I can tell that my “lead-out man” is tiring badly. He’s all over his bike now and looking really ragged. But if he dies completely or if he swings off, I’m in that tailwind section. I’m in the planned strike zone. I’m ready. I’ve got my sprinters radar senses tuned rearwards for the slightest sign of anyone thinking of coming over the top of me and beating me to my plan.  Somehow my “lead-out” manages to wring out a bit more speed to accelerate with the tailwind fast enough to dissuade anyone from coming round me.

Wait for it, wait for it, wait for it. 30 metres from the corner. Bang – I launch. I am instantly up the left; past my lead-out and able to pick my own line into the final right-hander. I nail the corner as well as I have ever done and am quickly back on the power. Damn that headwind. I immediately realise that the gear selected for tailwind acceleration is too steep for the headwind. I shift quickly down a gear. Phew, worked perfectly first time (thank-you silky Durace!) and I’m full gas.

When a sprint goes well. As in, when it goes really well. When you’ve got the full on “zing” that comes with being “on form”. It’s like you’re in some kind of special zone and operating on some higher, almost spiritual plane. The gear is just right to allow you to get the perfect amount of tension on the pedals to spin out the absolute maximum amount of power. You’re low on the drops and every fibre in your body is contributing to flicking the bike smoothly and quickly from left to right, bringing the pedals effortlessly up to meet your feet, ready to be blasted downward to maximum effect. You can feel the tension in your leg muscles. But it’s not “pain” as such. It’s just a sensation to let you know that everything is firing on all cylinders. And all you can hear is the wind rushing past your helmet and the rhythmic whoosh, whoosh of Vittoria CX on tarmac. Months and months of training for that special 10 seconds of awesome sprint heaven. Yeah, that’s what a good sprint feels like.

And this was one of those good sprints. One that felt “just-so”! Head down, I stormed up the left side of the track. As I near the line, I am peeking under my right arm for any sign of a challenge. But there is none. Ain’t nobody getting close to that sprint. Yes! I punch the air in delight. National Crit Champ for another year.

It is funny comparing my emotions to last year. After last year’s race and having tried for a number of years to win, I was pretty emotional to have finally, finally taken the title. Grown men, especially masters riders, don’t cry right. But in the privacy of my warm down lap and in the comfort of my own car – last year I was pretty “emotional”. This year there is jubilation mixed with a little relief. Jubilation to have won and relief that, having grown in confidence as the race progressed that this was mine for the taking, that I hadn’t messed it up!

So. First target of the year. Tick. What’s next? This weekend coming is the LVRC National Road Race Championships. This will be an altogether different and tougher challenge both in terms of the field and the course. However, I am hearing that roadworks have necessitated a last minute course change diverting what was a rolling section of the course up a narrow lane that includes two short and punchy 17% inclines with the finish a couple of miles over the top. Hmm, so this could suit someone who enjoys short punchy climbs and can sprint a bit. Maybe someone who has just moved up an age category and who is currently enjoying a bit of good form. We’ll see! Actually I just hope that I avoid any crashes/punctures/mechanicals and then as long as I give it my best shot, I’ll be happy.

What? What? Don’t look at me like that like you know me too well (especially you, Dad – I’m blaming you for this somewhat competitive streak you know). I will be happy whatever the result… 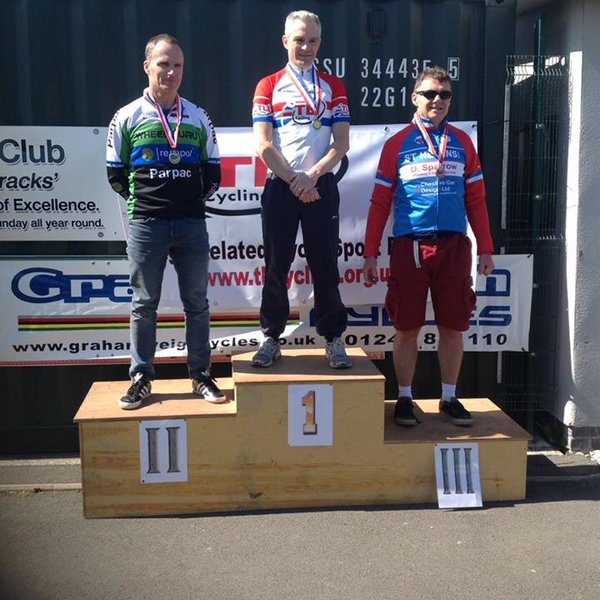