Mikey Weavers and Mark Bashford rode the 3rd Cat event. Unfortunately Mark succumbed to a mechanical, but Mikey rode well in the bunch and was unfortunate to caught behind a crash (and had to take to the grass!) as he manoeuvred into position on the final lap. Better luck next time!

Luke De Quay and Geoff Watson rode the 4th Cat event. Luke was looking strong, maintaining a good position towards the front of the bunch until around the half way mark when he suffered power loss to the legs and was tailed off. But following a quick swig of reviving energy drink, he found his second wind and was able to join up with a couple of other riders who worked well to finish on the same lap as the bunch. 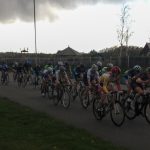 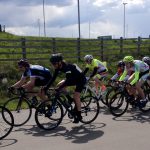 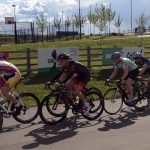 Geoff had a bit of a torrid time, was distanced early in the race and understandably cut a bit of a disappointed figure afterwards. I’ve said it may time before, but it’s worth saying again. I have huge, huge respect for anyone that has the courage to pin on a number and even start a road race! I don’t think “normal people” (not us, for we are cyclists, we are special) have any comprehension of the level of skill and fitness that it takes just to be able to ride in road race bunch – or quite how savagely unforgiving it is of beginners and those returning to the fold after a few decades of “rest”. So well done Geoff, and stick with it!

I rode the 2nd & 3rd Cat event. I stayed out of trouble and hid myself away in the bunch avoiding sticking my nose in the wind wherever possible (the pace was too fast for me to consider anything more adventurous!). As we raced into the final lap, I got myself into a good position for the sprint and was sitting about 5th wheel as we rounded the final corner (which was handily in front the almost inevitable crash). Unfortunately, that was as good as it got for me. With a stiff tailwind blowing up the hill, the sprint opened up right form the bottom corner and I didn’t even have enough horsepower left to follow the wheels, rolling in at the rear of the bunch.

Thanks also to chief supporter on the day, Gemma, who was giving the other girls some respite by not competing today!