THE LEGEND OF RON LONGSTAFF

East Grinstead Cycling Club’s long history is enriched by the experiences of its members, young and old. This year, we welcomed a new member who started riding before the club was formed and has a record that is possible without peer in the UK.  Ron has not only been riding for a long time but he raced well into his 80’s. Ron has joined as a 2nd claim member with his son recently moving into the area.

Over the years, Ron has clocked up a staggering one million miles. Which is about 40 times around the world and a lot of those have been at high speed! Ron loved the competition, especially against the clock in a time trial.

He started cycling when he was nine years old and as a young man, he clocked up more than 300 miles a week. Only in the last decade of his racing, which stopped in 2011 had that figure dropped to 200 miles.

Aged 20, he joined the Tyneside Vagabonds Cycling Club and went on to represent the England C team in the Isle of Man international race. He raced and won on the road, the track and even grass. He was the North East road race champion five times and held the Teesside record in 1953 with a time of 12 hours for 251 miles. In 1956 Ron was shortlisted fro the Olympic games

He went on to have a string of successes only stopped when family and work took priority and Ron had a “rest” from racing until he got back into it during 1967. If life begins at 40, then Ron proved that to be true because he was quickly back into winning ways in road racing and time trails from 10 up to 100 miles. Finishing in the top 3 in almost every race he entered, as an age group Vet, rarely beaten and on vet standard time, he was seemingly “impossible” to beat.

He  keeps a good record of races entered and results.  Below is an example of 1996, the year he was crowned world Vets champion.

In 2007, at the age of 80 Ron rode his very first 24 hour time trial covering an amazing 326.79 miles despite losing 1.5 hours through sickness and crashing out on the 2nd lap of the finishing circuit

He has raced in France, Italy, Austria and Belgium. He said: “I won the Veterans’ Road Race Championship in Austria in 1997 when I was 70.

Although Ron at 87 is still incredibly fit, he says he does not like to “preach” to other pensioners. He said: “I’ve done this all my life so it’s no great difficulty to carry on. I just get slower J  He eats a “normal” diet, does not smoke and rarely drinks.

Keep going Ron!  You are a true inspiration to everyone

Very sad news received today that Ange Nainby has passed away peacefully in her sleep on Wednesday.

Her funeral will be held at the Worth crematorium on Tuesday 10th at 1:45pm. 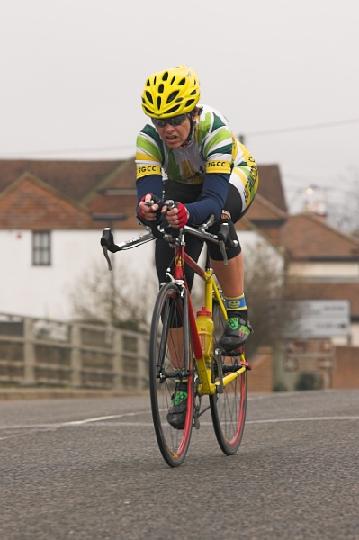 Entries are filling up fast for Europe’s biggest sportive, RideLondon-Surrey 100, which returns on Sunday 31 July 2016. To be in with a chance of riding what has become one of the world’s greatest bike rides, enter the ballot …