Having done last weeks event as preparation for this weekend i had a pretty good idea of what to expect, although the National course is about 150 metres longer. On that day i clocked a 2:22, but knew i could go faster. Today i was aiming for between 2:40 and 2:50.

I had as near a perfect run as possible, taking Mr Parker’s wise advice of starting “firm” but not too fast. The steepest part is around halfway in where the road cruelly ramps up to a 20% gradient, forcing you out of the saddle in the process. Past the finish for last week, i looked at the Garmin and was about 2 minutes so had improved significantly from last week. Then round the right hander into the relatively flatter section of about 8% gradient, but instead of easing up this is where you have to find that extra bit in you to pick up the speed and sprint for the line!

I stopped the clock at 2:50.7 official time, which although i knew would not be fast enough for first junior was pleased with anyway. I dont think i could have got much more out. It was good enough to take 8th Junior, with Harvey Weinberger doing an impressive 2:36. Adam Kenway took the overall honours with 2:18, which is remarkable considering he was knocked off his bike by a car only last week!

So thats my last race of the season, and my last as a junior due to being born in December. Hopefully next years national will be on a longer course, something like Holme Moss would be fantastic. 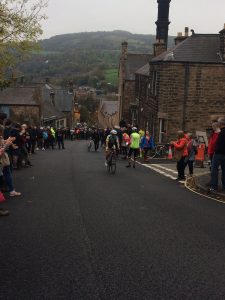