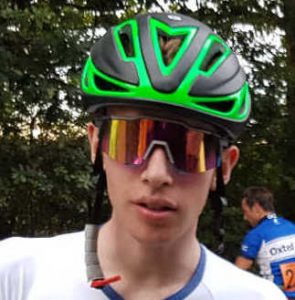 The Surrey league road race around the Dunsfold circuit I had been informed was pothole mania. Although not quite that bad, there was the occasional kick as one appeared in front of you but nothing too drastic. It was 9 laps and the bizarre thing was they were counting up on the lap board instead of down. So come lap 4 I still had plenty of water on what was a hot day so I started to get rid of it only to find out that the next lap was 5 and not 3. Chris (Filewood) and I had made a plan to attack with 3 or 2 to go, however this was easier said than done with the newly discovered funky lap board confusing me no end.
With 3 to go a retro team rider attacked, I had raced him in the handicap earlier that week, I didn’t like him, he was very full of himself and didn’t work well with others and was generally annoying. Anyway he attacked on the hill after a tight left at the bottom of the descent which completes a lap. In fairness to him he made a good fist of it putting 45 seconds into the bunch at one point and managing to stay away for a couple of laps, I thought he may have won it he was however brought back.
I however was realising the effects of dehydration as I had stupidly wasted water by dousing myself instead using it for its intended purpose and drinking it, so I decided against attacking and just stayed with the bunch. There was a period of sitting on the back of the peloton which nearly caught me out as the bunch concertinared and people started to fatigue.
The bell went which signalled the final lap (this was very helpful as I was completely lost at this point) and I moved up only getting to the front right at the end of the lap. Now the circuit finishes with a hill sprint just after the final descent. Instead of turning left at the bottom you take a gentle right, this was new for me as well as this cuts across traffic. The clever race organisers had thought of this and stopped the traffic prior to our assault to the line.
I had decided that Chris was the wheel to follow as I knew he was not afraid to get his elbows out and he had a tendency to end up at the front of races. I saw his wheel just at the top of the final descent and went for it, this is always a tightly packed moment as everyone gets excited in the bunch whilst people try to make there move. Sure enough as we hit the hill, Chris is near the front. The sprints begin and I follow Chris’s wheel up the outside and then it’s go time, I just push and stamp on the pedals, and start gaining, Chris and I pass a couple of people locked in our own battle. We crested the hill and there was still 20 meters tall o go. I passed Chris before the line but couldn’t quite catch the two ahead. I managed 3rd and felt strong. This gave me enough to reach second category and achieve my seasons goal with half the year to go. I enjoyed the race but would have liked to attack and try and make it more interesting. This will be my goal for the next races.
Mikey