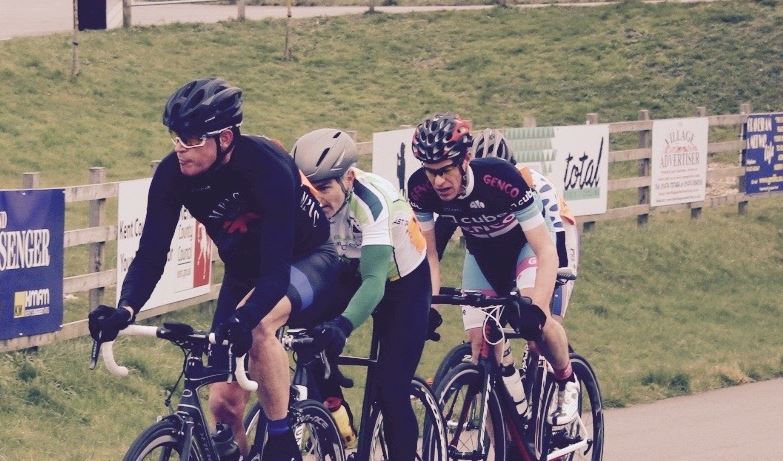 After a long winter, the “Openings Weekend” has finally arrived. For the Pros this means Omloop Het Nieuwsblad and Kuurne-Brussel-Kuurne while for me and a number of local “old boys”, this means the LVRC San fairy Ann Crits at the Gravesend Cyclopark.

A decent field took to the start line in cold and blustery conditions – but at least it was dry. With Anthony “attack from the gun” Wallis away on training camp, I was expecting a more measured start to the race. But, I was wrong! Round the first corner and Sheridan Bridal (fresh back from his training camp) powered off the front with Craig Barton in hot pursuit. I wasn’t well placed, was taken somewhat by surprise and initially underestimated the seriousness of the move. However, as I tried to bridge up, I pushed too hard into the red – and still didn’t quite make it across. As other riders scrambled past in the tailwind, downhill section I was struggling to recover and struggling to hold wheels. Jason Fitchew made it to the front and I found myself in a small but growing group in pursuit.

As we completed the first couple of laps, the gap out to the leaders was around 30 seconds. There were only about 15 or so riders left in the bunch – and only about half a dozen of those were doing any turns. We kept plugging away, and after about 20 minutes the gap to the leaders started to come down. Soon, Jason Fitchew was dropped from the leaders and it looked for all the world like we would bring them back. But the pursuit was taking its toll in the bunch who were also tiring. As we got to maybe 10 seconds from the leading pair, the steam just evaporated from the chase.

As the gap started to go back out, I knew that it was now or never. I pushed on hard. Not an attack, but a strong turn. Initially I gapped the bunch. As others realised what was happening, I was joined by first one rider, then two more. We pressed on, each sharing turns and immediately the bunch disappeared from sight behind us. Ahead we pegged the dynamic duo at around 20 seconds. There a couple points on the circuit where you can look across and gauge how far behind the leaders we were. And every lap the gap remained relentlessly constant. We just weren’t making any ground.

I missed the 5 laps to go board, but by the time we reached 4 laps to go our four had given up all hope of pulling back the leaders. The gap started to ease out and we started to soft pedal a little in anticipation of the finish. I kept doing my turns to maintain the momentum in the hope of dissuading anyone from trying a surprise attack. But I didn’t push too hard to make sure that I would be ready for the sprint.

We swapped turns right through to the bottom of the finishing climb. As we started the climb I was second wheel. With a stiff wind blowing from left to right and slightly into our faces I was conscious that I should not start my effort too early. As we reached about 250m to go, Jason went for an early one accelerating away to my left. I didn’t wait for anyone else to respond but jumped immediately in pursuit. I closed down the couple of meter gap that Jason had opened fairly comfortably by the 200m mark – and then paused for a second in Jason’s slipstream to let him burn some watts in the wind and spare a few of mine. At around 150 to go I jumped hard and to the right, quickly passing Jason to take the 3rd place.

So not a bad Openings Weekend. 3rd place overall. And with the two “youngsters” up the road being the best part of 9 years younger than me, I was first B Cat finisher (only 10 more weeks till I get “promoted” to C Cat!). This week marks the end of my winter Base phase of training. Next week is the start of my Build phase as I start to build towards a peak in May for a series of National Championship events. So far, so good. But plenty of work still to do…