A nice treat for Father’s Day – my Dad joined me on my trip out to Hog Hill for the ominously named LVRC Leg Buster Crit. This is the one LVRC event of the season that uses the full circuit at Hog Hill, including the feared Hoggenburg climb every lap. My main rivals for the day would be the GS Vecchi team trio of Tim Costello, John Alderman and Craig Wilson. I was pretty sure that they would have me marked out as well! With this in mind, I decided that attack would be the best form of defence. I hoped that if I could establish an early break, I might rid myself of one or two of the trio and establish some willing allies to help control the remainder. 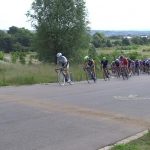 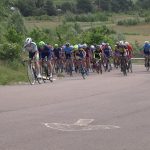 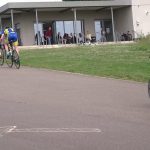 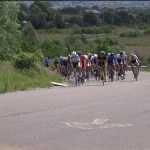 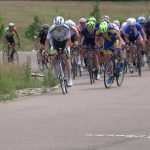 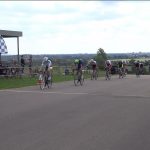 So for the early part of the race I covered every move and made several attempts to force a breakaway. But I was unable to force an escape and after 20 minutes or so I could feel that I was starting to tire. I figured that there was no way that I was going to be able to keep up this level of aggression all race. And it was round about then that Tim hit us with a powerful attack. I wasn’t ideally placed and hoped that others might cover the move. But Tim was too strong and he quickly established a gap. It wasn’t a huge gap to start with, but as the bunch faltered, Tim soon pulled out a 30 second lead.

And that was pretty much the die cast for the rest of the event. Bit of a chase, a few attacks – but nothing too stretching, and Tim gradually pulling away from us. As we neared the hour mark and the 3 laps to go board came out, I put in some final digs, trying to break free of the peloton. But with my legs fading and the bunch ever attentive there was no escaping. Time to gather for the inevitable bunch sprint.

I took the bell at the head of the bunch looking to ensure that I didn’t get boxed in for the final ascent to the line. With a headwind blowing down the final climb, I was relieved that an Eagle CC rider was keen to take up the sprint early and lead us onto the climb. I took his wheel and then waited until about the 250m mark before I launched my sprint. Diving for the right hand side of the track, I wanted to be sure to force anyone wanting to come around me out into the wind. With my sprinters radar turned rear-ward I could tell that I still had riders on my wheel. As we rounded the final right hand bend and the gradient stiffens, I could sense someone thinking about moving to my left. No way is anyone coming past me without a fight! I dig deep and manage a second kick to accelerate again as the gradient eases off a little towards the finish. This is enough to take me clear and over the line. Winner of the bunch sprint – but firmly in second place.

Chapeaux to Tim. It was a great ride by him. I continue to be pleased with my form this season. But second place. Second place is not where it’s at kids. Fortunately there’s still a next time. Another chance to go one better…