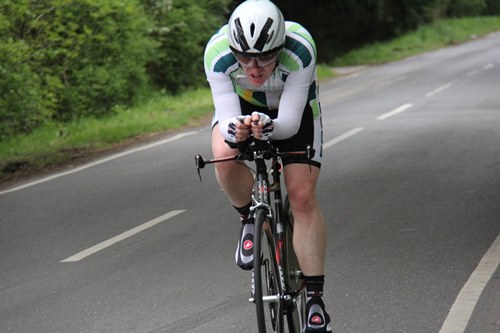 I was 2nd off so after a warm up on the turbo I headed down to the start line which was about 10 mins away. It was warmer than I had expected 15 C and the wind was light and from the North East which I believe  was  right for the course H25/8. I had done this course before and my times ranged from  1:04 to 59:37 my PB. I has also done a couple of tens which use the same strip of road so fair to say I knew the course.

I have trained with a power measuring device (PowerTap Wheel) for about 3 years but switched to BePro pedals so I could measure my efforts in a race and today I was aiming to hit an average of 250 Watts for the course.

I pulled up at the start and moved the front mech onto the large ring ready for the start. Ping! The cable broke. Now I did let out an unprintable expletive and considered pulling out but thought , “what the heck”  riding on the small chain ring would be an experiment at best so off we went. One of the officials told me that you can break the hour with a small ring and back in the day on a fixed wheel…   and I missed the rest as I pushed off.

Now the problem with a good excuse for going slower was just how much slower should it be without being a slacker. When I downloaded the ride to my computer for some analysis, my power and speed  were not far off on the drag and uphills sections but on the flats and downhill it was a shocker. I normally push a cadence of 85 to 90 but on lap 2 with 6 miles to go the 100 to 110 RPM took its toll and my calf cramped up.

My time was 1:02:19 which to be honest was only about 80 secs slower than I was expecting for my first 25 of the year so not a bad experiment after all. Oh and my avg power was 223 Watts which is probably the best time for less power I have done on this course.