Maybe you’ve done a few sportives or a couple of evening tens (easily offended, die-hard time trialists and sportivesters look away now) and are ready to progress to some proper racing! Maybe you’ve been out on a few club runs and just want to get stuck in. However you arrived here, you’ve decided to take the plunge and are ready to enter a Road Race. But which will be your first event?

Chances are it will either be a British Cycling  or LVRC  event (see links for details of these organisations and race licence arrangements). Now you need to select a race from either the British Cycling or LVRC race calendars. There are plenty to choose from, so let’s try and narrow that down a bit for you.

There is a saying – In order to finish first, first you have to finish! At your first few events your sole aim should be to try and finish with the bunch. This will quite likely take you a few attempts to achieve. When I first started as a junior all those years ago it took me a couple of races to finish with the bunch. When I returned to racing as an over 40 racer after a lay off of some 15 years or so, it took me three races before I managed to hang on to the bunch all the way to the finish. My point here is that finishing with the bunch when you first start is not easy and you will feel a tremendous sense of achievement once you’ve finally cracked it! 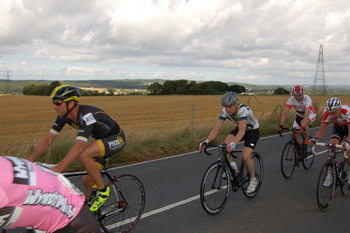 So when picking your first event, you should be kind to yourself and if possible select something that maximises your chances of staying with the bunch. So assuming you’re a 4th Cat, seek out a 4th Cat only event if you can. If you’re a lady, see if you can find a ladies only event. Also have a think about where your first event will be held. Purpose build, closed circuit races mean no pot holes, no road furniture and no traffic to worry about. That can help simplify things for the beginner. The other major benefit is that if you get dropped early on, you don’t have to plough on all by yourself. You can sit up, take a drink, have a bit of a breather, stay alert and rejoin the bunch a lap down. As long as you stay towards the back and don’t get involved in the racing no one will mind you rejoining the bunch. This means that you get a second change to gain more valuable bunch riding experience and that experience will pay dividends at your next event (plus riding in a road race bunch is just an awesome buzz!).

So take a look at the race calendars and pick something out! If you are thinking about some of the closed circuits, here are some suggestions with my thoughts on each…

The Hillingdon circuit in West London is almost completely flat and has no sharp corners. This means that you don’t need to brake anywhere and a good sized bunch (Hillingdon events are usually well supported) will whoosh around at a good pace with those towards the back of the bunch being sucked along in the draft (which is exactly what you are after in those first events). There are plenty of 4th Cat only events at Hillingdon. Wednesday’s the summer months sees an over 40s “Masters” race and a ladies only event running concurrently (with the bunches starting separately – the ladies ease up to let us old boys past when we catch them).

The Redbridge circuit (also known as Hog Hill) in East London can run races in a couple of different configurations. In my experience, British Cycling events generally use the full circuit which includes a fairly challenging incline up to the finish line each lap. This makes the circuit a little tougher for those of us carrying a few extra pounds, but don’t let that put you off. Especially in the 4th cat events, everyone is nervous of the climb and it won’t be taken flat out every lap.

Most LVRC events at Hog Hill use the “Lower Circuit” which is completely flat. The corners are a little more tricky than Hillingdon, but it is a good circuit and one that I always enjoy racing on.

The Cyclopark at Gravesend (just of the A2) is a relative newer comer having been fully open for only the last few years. At 3km in length, the circuit is fairly long for a closed circuit and features a long decline and an equally long incline up to the finish. I hesitate to call it a hill as it’s not really steep enough to qualify as a hill, but it is very” draggy” and can be exposed to some cross winds which add to the challenge. That said, I would recommend this for one of your first events. The circuit is used by LVRC, Surrey League, South East Road Race League (formerly Kent League) and open British Cycling events – and it’s probably my favourite circuit.

Not a dedicated cycle track this. It’s just a circuit at the Dunsfold Park business park / aerodrome and is probably more famous as the Top Gear test track (as in the BBC TV programme). Being an aerodrome it is completely and utterly flat and has no sharp corners – which makes it a great place to make your road race debut. As far as I know, the circuit is only used for Surrey League events. Over the course of the summer there are a series of Wednesday evening Masters (over 40) races and Friday evening 4th Cat events.

Another test track, Dunton is a Ford cars test track in Essex used for LVRC events (alternate Thursday evenings during the summer). The track is pretty flat – apart from the banking around some of the corners. But don’t worry. These are not “Velodrome steep” banking and so nothing to be worried about! I have not seen the track used by British Cycling, so I think that this may an LVRC only track.

Using the cycle track in Preston Park in Brighton for road racing is a new one on me. These events seem to have started very recently (around the Autumn 2013). The 580 metre long D shaped track is flat and obviously lacking in any sharp corners. I have not been down to check out these races yet, but there do seem to be a series of events in the calendar including 4th cat only events.