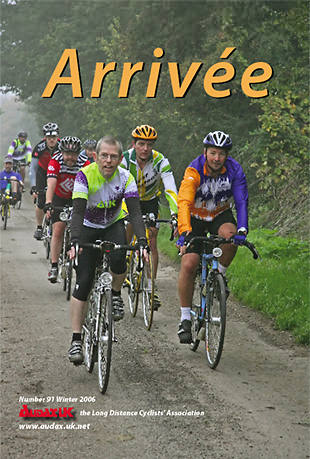 Martin makes the cover of the Audax magazine !

I put this down in the calendar it the beginning of the year because
it (a) was around my old stomping ground of the Chilterns and the Thames Valley and (b) gave me a good excuse to stay with my friend nearby and have curry
and BEER the night before.

37 riders started the 200 from Chalfont St Peter, and went straight up the hill to inspect Tesco’s expensive pile of rubble in Gerrards Cross. Then through the back of beyond to Marlow where a long stretch to
Christmas Common (cue extemely tough gully and kites; the bird kind).

A lovely descent down to Watlington where we met the wind all the way to
Lambourn. This was interspersed with some awfully poshe caffes and the very very silly Streatley Hill where I had to look as if I was enjoying it for photographer Tim Wainwright.

A superb 75 km/h descent of the Ridgeway to Wantage where (Fixed) Phil filled me in on what was to come; a stiff climb back up the Ridgeway then down to Lambourn and then all very pleasant back to the Thames. For much of the ride I rode with a chap with an LEL stormtrooper jersey and a bloke on his first 200, also a chap from Gravesend CTC who I usually end up riding at the same pace as.

The route sheet was generally pretty good but the distances were often found lacking in that we e.g actually travelled backwards for about (-) 500m; I believe this was partly the result of cobbling
the route together from part of a 600.

We overshot one turn as the distance was completelty AOF.A stop at a desinger sandwich bar in awfully poshe Pangbourne was followed by some silliness as we retraced much of last year’s Upper Thames 200; it was light and dry but as we were still not nowhere near the finish this was not necessarily better than the UT.

At the end of the silly section I met Phil who had taken the main road bypass and was not having a good day (although probably a lot better than I would have been having ridden LEL this year), It finally started to rain in Cookham but the wooded slopes of the last few hills Gavin could scrape up kept me mostly dry. Finished the 207km in 10.30.

A recommended ride, a bit of everything and well organised.